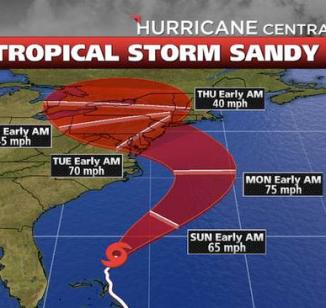 1700 Hours, Friday Oct. 26, 2012 – A very dangerous Hurricane Sandy is on track to directly hit Delaware and the mid-Atlantic in the days ahead, based on the latest forecasts, threatening to lash the region with up to two days’ worth of hurricane-force winds, a 10-foot-high combined surge and tide and torrential rains that could measure as much as a foot deep in some places.

The storm, a rare, late-season hurricane working its ways up the United States coastline, represents one of the most significant threats to Sussex County and the region in decades.

“If you live in an area that is prone to flood, if you live in a mobile home or a structure that is not sturdy, you need to be paying attention now. Don’t wait for an evacuation order. Begin to make preparations now to move,” said Sussex County Emergency Operations Center Director Joseph Thomas.

“Heed the warnings. Listen to your gut. Use some common sense. This is going to severely affect somebody, and right now it looks like we are in the crosshairs,” Mr. Thomas said.

Forecasters with the National Weather Service and the National Hurricane Center expect the now-Category 1 storm, with sustained winds of 75 mph near the Northern Bahamas, to begin drifting toward Delaware later this weekend before coming ashore late Monday night or early Tuesday morning, somewhere in the area of the Delmarva Peninsula.

However, the storm’s first effects could begin to be felt as early as Sunday, with tropical storm-force winds beginning then and lasting at least 24 hours, followed by hours of sustained winds of 75 mph or greater, especially at the coast.

The storm’s slow movement, as well as how it interacts with an approaching cold front, could cause the system to slow or almost stall over the region, leading to days of heavy rain, repeated above-normal tide cycles, and intense wind-driven flooding in coastal areas.

No evacuations have been ordered, and no shelters have been designated at this time. However, emergency planners are discussing possible evacuations and shelter designations, and an announcement could come as early as Saturday.

The Sussex County Emergency Operations Center continues to monitor the situation and reminds the public to prepare now in advance of the storm. Have a supply kit ready, know the evacuation routes, and plan on where to relocate.

Forecasters believe Hurricane Sandy’s current predicted track will come close enough to give Sussex County some of the strongest effects of the storm, with moderate to severe tidal flooding likely in low-lying areas, particularly along the oceanfront, Inland Bays and the Delaware Bay shoreline. Storm surges and tides could swell by as much as 10 feet, exacerbated by a full moon Monday that is already expected to cause higher-than-normal astronomical high tides. Meantime, up to 13 inches of rain is expected across the county.

With high winds expected over a prolonged period, downed trees and power lines – and the possibility of electrical outages lasting for multiple days – are a distinct possibility with this storm.

Residents and property owners should take this time now to secure loose objects, such as lawn chairs, trash cans and holiday decorations, to prevent storm winds from turning those items into potential projectiles. Also, residents in low-lying tidal areas should make sure submersible pumps are working and check storm drains to ensure they are clear of debris, such as leaves that are beginning to fall.

Meantime, residents should ensure they have adequate supplies on hand in preparation for the storm. These items include:

· A three-day supply of water. This should include at least one gallon of water per person per day;
· Non-perishable foods and a manual can opener;
· A change of clothes and shoes for each person;
· Prescription medicines;
· A blanket or sleeping bag and pillow for each person;
· Personal hygiene items;
· A flashlight and extra batteries for each person;
· Special needs items, such as formula and diapers for infants, as well as items needed for elderly or disabled family members;
· A portable radio with extra batteries;
· Money. During power outages, ATMs will not work;
· Fuel. Gas pumps are also affected power outages.

The Sussex County EOC encourages residents and visitors to continue monitoring the tropics and conditions as they deteriorate.