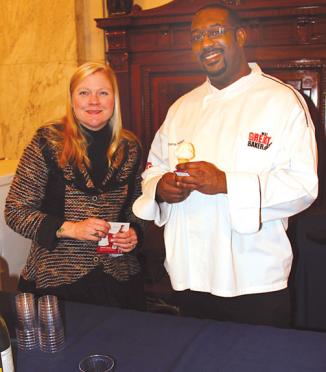 Senator Coons: As anyone who has looked at the beautiful Delaware flag knows – and it flies in our offices and hallways here–it has a date emblazoned on the bottom – December 7, 1787, and that is known as Delaware Day. That is the day when Delaware became the first state to ratify the U.S. Constitution.

So to celebrate Delaware Day, we do some things together, don’t we, Senator Carper?

Senator Carper: And we have fun doing them. One of the things we are going to do–a great idea from a brand new senator to Delaware about a year ago—we have a “Taste of Delaware” day. We are doing that this afternoon. It is not something paid for by the federal government but sponsored by our Delaware State Chamber of Commerce, as I recall, and others of its members to really be able to show off some of the finest of our state, and some of them pretty tasty, as it turns out. So we are looking forward to a lot of people coming by and enjoying that.

Senator Coons: We are looking forward to doing that in just a few minutes, actually. We have Dogfish Head beer, we have Grottos pizza, and Capriotti subs, we’ve got dozens of restaurateurs and breweries and wineries from across Delaware – in age-appropriate settings – who will make available some of the finest of what Delaware has to offer. It is my hope that members of staff and our colleagues will join in the celebration of Delaware Day.

One of the questions folks who are listening might have is: What about Delaware are you celebrating? It is, in my experience – and I believe my colleague’s – a state that is not just the First State, because of a wonderful accident of history, where we were the first state to have the vision and the courage to sign the Constitution, to ratify it, but it is also a state that has a nearly unique culture – a culture of respect, of innovation, of education, and of civility. It is a place that has a special, even a unique political culture, one that is at times the polar opposite of what I have seen here – forgive me, Madam President–in the last two years. Delaware, much like New Hampshire, feels and seems like a small town that, through the magic of federalism and the Connecticut Compromise and the Continental Congress, a state with two senators.

One of the things I am proudest of about my state – and Senator Carper knows this well – is a tradition that just celebrated its 200th anniversary. It is the epitome of what we call the Delaware Way. It is a tradition that happens two days after every election. It is called Return Day, and it happens in Georgetown, which is the county seat of our southernmost county, Sussex County. What happens two days after the election, there’s a lot of different pieces to it, but the first thing that happens is we all gather out at the Marvel Nutter Farm and two by two – ark rules – the candidates who ran against each other in the general election get into horse-drawn carriages and ride slowly down the main streets of Georgetown where crowds of thousands come out to see the candidates, who just days before were engaged in vigorous political combat, being polite, being friendly, and waving to the crowds.

What happens after that Senator Carper?

Senator Carper: We have this beautiful center of the town of Georgetown, with all these beautiful old brick buildings, courthouses and other, and as we gather there in the circle of Georgetown the town crier comes out on the balcony of the courthouse and he has on his top hat and his tails and he announces the results of the election two days earlier. This is Thursday after the election. He calls out the results of the election two days earlier just for Sussex County, Delaware, where about a sixth of our state’s population lives. He calls out the results of everything from president, vice president, all the way down to clerk of the peace or sheriff. And when he finishes, we have a couple of short speeches on the platform there in front of thousands of people, maybe a patriotic song or two, and then the leaders of parties, Democrat, Republican, maybe Libertarian chairman, take a hatchet – a pretty big hatchet – and they grab it, each holding on, and they put it down in a glass aquarium half-full of sand. And then someone brings in some buckets of sand, maybe from Rehoboth Beach or Dewey Beach, and they cover up and literally bury the hatchet.

Some of my colleagues from New Jersey said: If we had a ceremony like that in our state, and we buried the hatchet, it probably wouldn’t be in the sand. It would be in the anatomy or some part of the body of our opponents. But we do it in the sand. And then we have maybe a benediction, and we go off and eat, and people open their homes for a reception. So as the day carries on and the sun sets in the west, the travails and the passions from the election begin to dissipate and people start to think and refocus not on how do we beat our opponents’ brains out, but how do we work together to govern our state.

It is a wonderful, wonderful tradition. Senator Coons and I have talked about this before. We think we could use a Return Day for our country. It certainly works in our state. It has a very civilizing effect on all our campaigns.

Senator Coons: Whether it is the reception in the morning, the long carriage ride through the middle of Georgetown, the speeches on the podium, the announcement of the results, the literally burying of the hatchet, or the receptions that go on all afternoon and into the night, the experience of Return Day for me – and I believe for my colleague Senator Carper – has been one of reconciliation, one of moving past the election and then forward toward the challenge of making decisions together for the people we represent.

Everybody shows up–the winners and the losers. It is only the sorest of losers who don’t show up and only the most arrogant of winners who don’t show up. So, frankly, it is almost always everybody. In the elections I have been blessed to stand in and be successful in for the people of Delaware, Return Day is a great end to the campaign season and beginning of our season of service to the people of Delaware.

So as we go from the floor now to the reception in honor of Delaware Day, I want to say how grateful I am to serve with my senior senator, who has always been personally a model of the civility, of graciousness, and of the service that marks the Delaware Way and marks Delaware Day, which we celebrate officially tomorrow, but which we kick off tonight with a reception.

Senator Carper: I would add to that this is a commitment to civility that Senator Coons and I share, and it is also one that our Congressman John Carney certainly warmly embraces, and before him, Mike Castle. If you think of all of those – Castle with a “C”, Carney with a “C”, Coons with a “C”, and Carper with a “C”, people say what is it with the letter “C” and the state of Delaware?

If I can, before we close here, I want to roll back in time about the economy of our state. People say what do you all do there? How do you provide for your living, your income? I would say the economy of our state is pretty much founded on the letter “C.” It includes corn. We started off by growing corn. Chickens, there are a whole of lot of chickens there. For every person in Delaware, there are 300 chickens. For anyone listening and wondering what to have for dinner, chicken would be good. We have chemicals – the DuPont Company.

A poor impoverished French family came to Delaware over 200 years ago and established what I call the DuPont Country Club. They didn’t have many members. They figured they needed to establish some jobs so people could join their country club, so they started a chemical company, and a power company, and now they have quite a successful science company in our state – for over 200 years. We have cars. We have built a lot of cars over the years for GM and Chrysler. We are home to corporations of over half the New York Stock Exchange, half the Fortune 500. Credit card businesses are in our state. The coast of our state is the site of the nation’s summer capital – Rehoboth Beach and a bunch of other places. So the letter “C” has been pretty big.

People say: Well, why do they call you the First State? Well, we are actually the first colony that threw off the yoke of British tyranny on June 15, 1776 and at the same time said to Pennsylvania, take a hike, we want to be a state on our own. And then 225 years from tomorrow, to be exact, we were the first state to ratify the Constitution.

We have the best beaches in the country. Last year I think there were four five-star beaches in America, with two of them in Delaware – Rehoboth and Dewey Beach. We have the best Air Force base, we think, in the world. We were first in PhDs per capita. We have, I think, the finest Judiciary – acknowledged year after year after year as the finest judicial system in the states. We have the best financial controls and cash management system. We have had AAA credit rating since – what was that guy’s name as Governor, Carper or something? We continue to have that kind of credit rating. We are proud of being first.

As Senator Coons said, this all goes back to Return Day. When you announce your candidacy for election, whether it is for the U.S. Senate or whether it’s sheriff, you know at the end of the campaign – two days after the campaign – you are going to be in Georgetown, Delaware, in a horse-drawn carriage or maybe an antique car with the man or woman you were running against, their family, your family, and surrounded by friends and supporters and thousands of other people. And I think it has a very tempering effect on the nature of our campaigns, a wonderful effect.

That is just one of much that we are proud of in our state. We are lucky to be senators from this state, but this is a state that works and focuses on results. This is a state where we govern from the middle, whether the Governor is DuPont or Castle or Carper or Markell. And whether the Senator is Roth or Carper or Coons or Biden or Kaufman, we govern from the middle. We are a state where Democrats and Republicans actually like each other. We just want to get things done and do what is right for our state.

With that in mind, we hope some of our friends and neighbors can join us later today in the Russell Building up on the third floor. We will make a toast to Delaware and enjoy some sarsaparilla and some other goodies as well.

It is a great joy to serve with my friend.

Senator Coons: I thank my colleague. With that, I yield the floor.