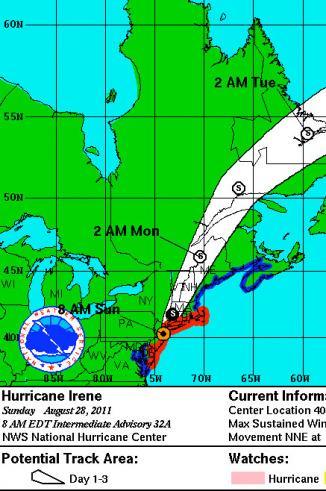 State College, PA (28 August 2011) – AccuWeather.com reports Irene continues to move north along the coast of the Mid-Atlantic, and will bring flooding rains, damaging winds and coastal flooding to the Northeast today.

6:45 a.m. EDT SUN: The center of Irene made landfall at 5:35 a.m. this morning near Little Egg Inlet, N.J., as a category 1 hurricane with maximum winds of 75 mph. The storm is now just hours away from passing near New York City.

Since Irene remains such a large storm, heavy rains extend all the way west to central Pennsylvania, and south across the Delmarva region. In many areas, more than 6 inches has already accumulated in rain gauges with more to come over the next few hours, leading to widespread low-lying and river flooding. However, rainfall tapers quite a bit to the south of the center of Irene, meaning that once the storm centered passes by any given area, the worst conditions will have ended.

Power outages continue to grow in number over the Mid-Atlantic. Over 3/4 of the Dominion Power customers in the Richmond Metro area are without power at the present time with approximately 3 million people total in the dark from the Carolinas to southern New England.

Wind gusts above 60 mph have been measured in the New York City area this morning, with gusts up to 80 mph likely across Long Island and near the southern New England coast as the center pulls north.

Earlier in the evening, a few of the stronger rain bands produced tornadoes. At least 15 homes were damaged from a twister in a subdivision near Lewes, Del.

Tropical storm-force winds continue to move north, and now extend from southeastern Virginia north to southern Connecticut. At the coast, water rises of 2 to 4 feet and locally as high as 6 feet will be possible as Irene draws north.

Though Irene will weaken to a tropical storm once it moves inland, its massive size still poses a serious threat to lives and property.

Residents of the mid-Atlantic, including New York City, have been preparing for Irene for days now, with millions of people displaced from their homes. Fortunately, many who have been ordered to evacuate have heeded the warning of emergency officials.

For those who have not experienced a hurricane first-hand, AccuWeather.com’s Jesse Ferrell states, “This will be like a severe thunderstorm that goes on for 12 hours.”

The large circulation of Irene, although not extreme, will bring coastal flooding and battering waves northward from the Carolinas into New England and into parts of the major bays and sounds along the way.

Irene threatens to bring the worst effects from a hurricane in 50 years in a large part of the I-95 Northeast in terms of flooding and power outages.