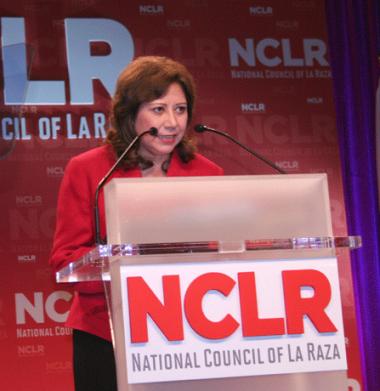 Janet Murguía will be the keynote speaker at this year’s LACC Gala Dinner to be held at the Waterfall Conference Center on Friday, September 25, marking the 40th anniverary of the community center in Wilmington.

Murguía is President and Chief Executive Officer of the National Council of La Raza (NCLR), the largest national Hispanic civil rights and advocacy organization in the United States.

Since 2005, Murguía has sought to strengthen NCLR’s work as a vital American institution. One of her first priorities was to improve opportunities for Latino families by strengthening the partnership between NCLR and its network of affiliates, which annually serve millions of people in 41 states, the District of Columbia, and Puerto Rico.

During the 2008 election, under Murguia’s leadership, NCLR and its partners helped to register nearly 200,000 new Hispanic voters. Other initiatives and partnerships helped more than 1.5 million eligible immigrants apply for citizenship.

Murguía has also focused on strengthening NCLR’s relationship with sister civil rights and advocacy organizations by spearheading efforts to build bridges between the African American and Latino communities through organizations such as the NAACP and the National Urban League. She was also the first Hispanic leader to give the keynote speech at the annual Dr. Martin Luther King, Jr. Unity Breakfast in Birmingham, Alabama.
Murguía currently serves on the boards of the Independent Sector (a coalition of leading nonprofits, foundations, and corporations) the Hispanic Association on Corporate Responsibility and the National Hispanic Leadership Agenda, and is an executive committee member of the Leadership Conference on Civil Rights.

Murguía has been recognized for her work on numerous occasions, and has been featured in Newsweek magazine’s “Women and Leadership” issue; named as of the “100 Most Influential Hispanics” by both People en Español and Hispanic Business magazine. In 2005, she received the KU Law Alumni Association Distinguished Alumnus/na Award.
Murguia worked at the White House from 1994 to 2000, ultimately serving as deputy assistant to President Clinton. She also served as deputy campaign manager and director of constituency outreach for the Gore/Lieberman presidential campaign. In 2001, Murguía joined the University of Kansas (KU) as executive vice chancellor for university relations, overseeing KU’s internal and external relations with the public, including governmental and public affairs.