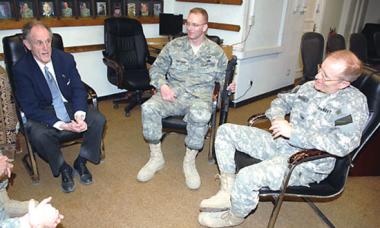 BAGRAM, Afghanistan – In a conference call with reporters from Bagram Air Force Base in Afghanistan Thursday, U.S. Sen. Ted Kaufman (D-Del.) shared details about his trip to Iraq, Afghanistan, and Pakistan this congressional recess.

The purpose of the trip was to assess security, military, and political developments in these regions. During his visit, Kaufman met with Prime Minister Nuri al-Maliki in Iraq, President Hamid Karzai in Afghanistan, and President Asif Zardari and Prime Minister Syed Gilani in Pakistan, as well as U.S. military and civilian leaders and troops.

On the call, Kaufman assessed the drawdown in Iraq, saying, “The good news is things are moving very well in terms of us getting down to 50,000 troops by Sept. 1 of this year and out of Iraq by Dec. 31 of next year.”

However, Kaufman added, “The one real sticking point that has to be worked out is…northern Iraq.”

He said that there are disputes between the Kurds and Arabs, but that joint Kurdish-Arab-American military checkpoints, which he visited, are mitigating chances for violence.

Regarding improvements in the security situation since his last trip in September, he assessed, “It is really quite dramatic how much better the atmosphere is, both in Kabul and in Baghdad,” he said. “It’s really incredible, but it’s still dangerous when you’re out beyond the protection of the embassy or the forward operating bases. But I didn’t have a problem.”

On the subject of Afghanistan, Kaufman noted that the most significant issue is government corruption.

“Getting the Kabul government led by Karzai to stop corruption is one of the truly key things we have to get done,” he said. “I think we’re making progress.

“We’re declaring war on corruption. And I think Karzai says all the right things. He said good things after his inauguration. He talked about putting together a corruption task force.”

Kaufman suggested that the most important things to improve the situation in Afghanistan are cooperation by Pakistan, training of Afghan Army and police, and an increased civilian role alongside the military.

“The really incredibly impressive thing about what’s going on over here is that the military is totally on board with the idea that the key thing that we have to do in these districts is not just to go and kill the Taliban or even chase the Taliban out,” he said. “You have to keep them out. And the best way to keep them out is through civilian development.

“This is not nation-building. What we are trying to do here is defeat the Taliban and then have it turned over to the Afghan national army and national police.”

Kaufman also said that Pakistan is increasing its cooperation with the United States. After meeting with the President and Prime Minister, Kaufman reflected, “Both of them want to work with us. It’s a very complex relationship. They’re very concerned about India and they’re also very concerned about Afghanistan.”

He went on to say that, “We always encourage them to do more between the border of Pakistan and Afghanistan. … They have been more helpful but not nearly as helpful as we would like.”

On this Congressional Delegation trip, Kaufman traveled with Sens. Jack Reed (D-R.I.) and Kay Hagan (D-N.C.). All three Senators are members of the Armed Services Committee. Kaufman is also a member of the Foreign Relations Committee. This is Kaufman’s third trip to Iraq, Afghanistan, and Pakistan.