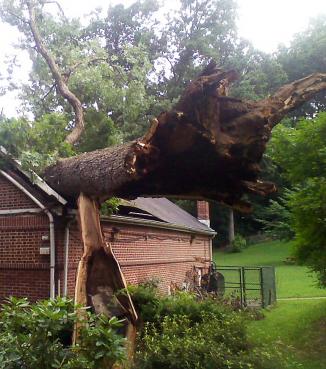 WILMINGTON (July 12, 2013) – The Brandywine Zoo will be closed Saturday, July 12 after a large tree crashed through and destroyed the roof of the zoo’s Monkey House. In addition, one wall of the Monkey House buckled as a result of the tree crashing down.

There were no reported injuries to humans or animals; however three smaller monkeys are under veterinary observation as a precautionary measure.

All of the monkeys are being temporarily moved to zoos in New Jersey and Pennsylvania. The Brandywine Zoo has cooperative agreements through its membership in the American Zoo and Aquarium Association to house animals at other zoos after incidents that necessitate emergency housing.

City of Wilmington building officials are onsite to ensure the structure is safe and cordoned off.