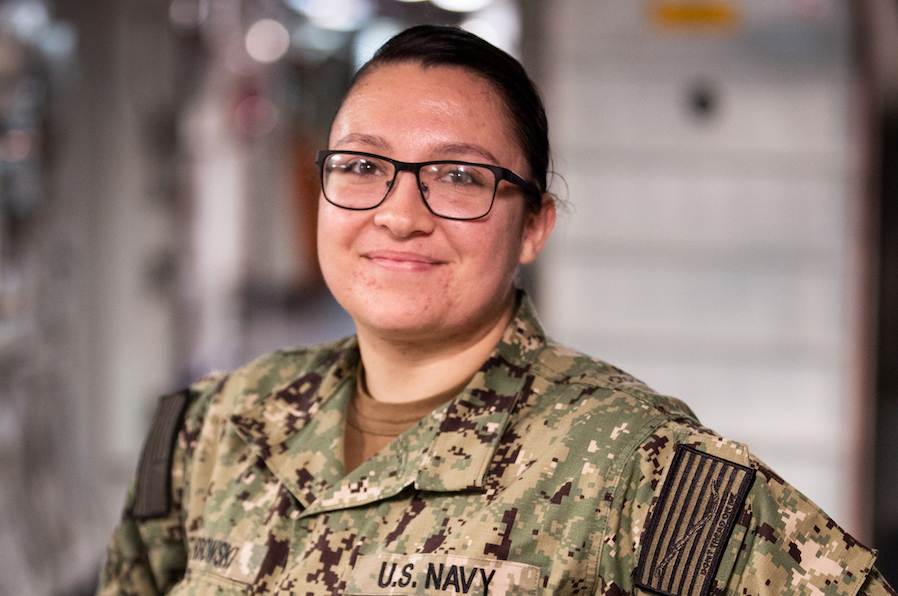 YOKOSUKA, Japan – Petty Officer 3rd Class Samantha Cendrowski, a native of Laurel, Delaware, wanted the opportunity to experience a new culture and the Navy provided that.

Now, three years later and half a world away, Cendrowski serves aboard the aircraft carrier USS Ronald Reagan, patrolling one of the world’s busiest maritime regions as part of the leading-edge of U.S. 7th Fleet.

“It’s very fast-paced here and a bit overwhelming sometimes but there are more opportunities to learn about the Navy,” said Cendrowski.

Cendrowski, a 2015 graduate of Laurel High School, is a personnel specialist aboard the Yokosuka, Japan-based ship, the only forward-deployed aircraft carrier in the Navy.

A Navy personnel specialist is responsible for providing personal administrative duties for fellow sailors and their family.

Cendrowski credits success in the Navy to many of the lessons learned in Laurel.

“I have made many friends on the ship,” said Cendrowski. “It feels like a home away from home.”

U.S. 7th Fleet spans more than 124 million square kilometers, stretching from the International Date Line to the India/Pakistan border; and from the Kuril Islands in the North to the Antarctic in the South. U.S. 7th Fleet’s area of operations encompasses 36 maritime countries and 50 percent of the world’s population with between 50-70 U.S. ships and submarines, 140 aircraft, and approximately 20,000 sailors.

“Being a forward deployed sailor is a whole different ballgame because you learn a lot more here about the Navy than anywhere else,” said Cendrowski. “Also, everyone is so focused on what their tasks are so it’s good to feed off of other people. It motivates you to better yourself.”

With more than 50 percent of the world’s shipping tonnage and a third of the world’s crude oil passing through the region, the United States has historic and enduring interests in this part of the world. The Navy’s presence in Yokosuka is part of that long-standing commitment, explained Navy officials.

“The Navy is forward-deployed to provide security and strengthen relationships in a free and open Indo-Pacific. It’s not just the ships and aircraft that have shown up to prevent conflict and promote peace,” said Vice Adm. Phil Sawyer, commander, U.S. 7th Fleet. “It is, and will continue to be our people who define the role our Navy plays around the world. People who’ve made a choice, and have the will and strength of character to make a difference.”

Named in honor of former President Ronald Reagan, the carrier is longer than three football fields, measuring nearly 1,100 feet. The ship, a true floating city, weighs more than 100,000 tons and has a flight deck that is 252 feet wide. Two nuclear reactors can push the ship through the water at more than 35 mph.

Sailors’ jobs are highly varied aboard the carrier. Approximately 3,200 men and women make up the ship’s crew, which keeps all parts of the aircraft carrier running smoothly — this includes everything from handling weapons to operating nuclear reactors. Another 2,500 men and women form the air wing responsible for flying and maintaining more than 70 aircraft aboard the ship.

Ronald Reagan, like each of the Navy’s aircraft carriers, is designed for a 50-year service life. When the air wing is embarked, the ship carries more than 70 attack jets, helicopters and other aircraft, all of which take off from and land aboard the carrier at sea.

Serving in the Navy means Cendrowski is part of a world that is taking on new importance in America’s focus on rebuilding military readiness, strengthening alliances and reforming business practices in support of the National Defense Strategy.

“Our priorities center on people, capabilities and processes, and will be achieved by our focus on speed, value, results and partnerships,” said Secretary of the Navy Richard V. Spencer. “Readiness, lethality and modernization are the requirements driving these priorities.”

Though there are many ways for sailors to earn distinction in their command, community, and career, Cendrowski is most proud of taking on more responsibility. She has become a sailor where others have become reliant on her to get the job done

“I haven’t been to the command for very long, but people have started to rely on me for help,” said Cendrowski. “I have learned so much since being in the Navy that I don’t think I would have had had the opportunity anywhere else.”

As a member of one of the U.S. Navy’s most relied upon assets, Cendrowski and other sailors know they are part of a legacy that will last beyond their lifetimes contributing to the Navy the nation needs.

“I love serving in the Navy because the Navy has given me so many opportunities,” said Cendrowski.