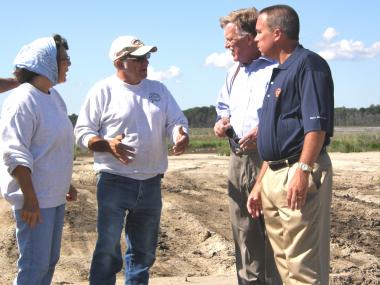 KITTS HUMMOCK – Lawmakers and residents of this costal community took a stroll down the beach here Tuesday to check on the Delaware Department of Natural Resources and Environmental Control’s efforts to combat a flooding problem that forced an emergency evacuation during a storm last year.

Sen. Brian Bushweller, D-Dover North, and Rep. Brad Bennett, D-Dover South, said the efforts to rebuild dunes around Kitts Hummock as well as drainage ditches around the community are important protections for the town and the marshes surrounding it.

“These are important, but in a sense, they’re temporary until we can work out a better long-term solution,” Bushweller said. “We’ve got hydrologists and other experts looking at this to find something better, but this will hopefully prevent the kind of disaster they had last May.”

That’s when a combination of a storm and high tides forced the emergency evacuation of the town, located southeast of Dover Air Force Base.

Like most costal communities, flooding – especially when the combination of high tides and storms hit – is a problem. But residents like Andy Mariani say they feel Kitts Hummock as been neglected.

“You talk to some of the DNREC people and they’ll tell you that it’s Mother Nature at work,” he said. “But if they didn’t do something, Mother Nature would have Dover Air Force Base underwater in five years. Sen. Bushweller and Rep. Bennett have been great. They came out, listened to our concerns, cut through the red tape and got this moving.”

Bennett said the work is important and praised DNREC for doing the project on its own.

“They already had sand out here and have been using their own resources to do this work,” Bennett said. “They’d been talking about hiring consultants to come in and study this, but they’re using their own staff. Secretary [Colin] O’Mara should be commended for taking on this problem.”

Bushweller said he and Bennett started meeting with residents here during last year’s campaign and made working on the issue a priority once they took office.

“Last May, the water just swept away the dunes and went into Kitts,” he said. “The Little Creek Volunteer Fire Department had to come in by boat to get a couple of the people out, so we knew something had to be done.”

Sue Rodgers said Bushweller’s willingness to listen and to push for solutions has been a welcome change.

“He’s been a godsend,” Rodgers said. “He’s listened to us and he’s been here for us and that’s the first time in a long time that we’ve seen that from a politician.”

As things move along, Bushweller said he wants to hold meetings with DNREC officials and residents to look for long-term answers.

“I know the DNREC folks will have some good ideas and some of the people here have ideas that seem pretty sound, too,” Bushweller said. “I look forward to bringing everyone together to come up with solutions.”