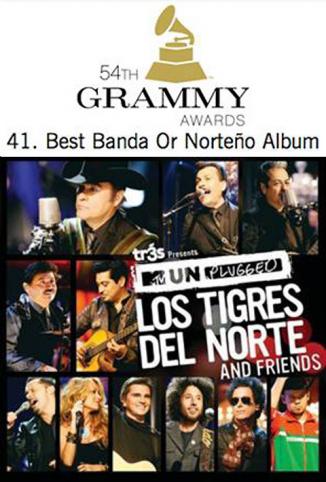 Los Angeles, CA – Los Tigres del Norte were recognized as winners of the Best Norteño Album at the 54th Annual GRAMMY Awards. Winning their Sixth career GRAMMY Award for their landmark “MTV Unplugged: Los Tigres del Norte and Friends” album, the legendary group widely known as ‘the voice of the people’ continue to set the benchmark for artistic excellence in their genre.

The first-ever MTV Unplugged project dedicated to Regional-Mexican Music, “Los Tigres del Norte and Friends” finds the pioneering Norteño superstars revisiting many of their greatest career recordings in an acoustic format while joined by special guests such as Juanes, Residente of Calle 13, Paulina Rubio, Diego Torres, Andres Calamaro and Zack de la Rocha of Rage Against The Machine in his first-ever Spanish language performance.

“MTV Unplugged: Los Tigres del Norte and Friends” debuted at #1 On Billboard’s “Top Latin Albums” chart and was one of the genre’s best-selling albums throughout the year- receiving a rare Diamond Sales certification in Mexico and going Gold In The United States. Having already won the most recent LATIN GRAMMY for the genre, today’s GRAMMY recognition gives the album a clean sweep of the year’s two most significant awards for Norteño music.

Currently in the midst of a U.S. tour, Los Tigres del Norte were greeted by thousands of fans at packed concerts this weekend in New York, Boston and Denver. As they continue to tour in February and March, Los Tigres will soon add to their legacy of bringing Regional Mexican Music to new audiences as the band gives the genre’s first-ever performance in the newly built Valley Performing Arts Center in Northridge, California. The performance will take place on March 8, 2012.