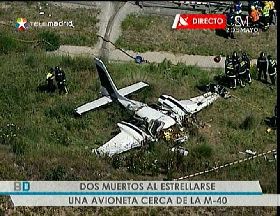 The remaining people on board, including two babies, are believed to have perished inside the fuselage after it crash landed several metres from the side of a runway.

Reporting from Bajaras airport, Sky Correspondent Ian Woods said: “When you hear the descriptions of what the rescue workers found when they got to the scene of the stricken aircraft, it seems almost incredible that anyone survived a fireball such as this.

“The focus of the investigation will now be on what exactly happened to that the plane in the last few seconds as it reached the end of the runway.”

The extent of the tragedy was described by a worker of airport owner AENA who witnessed the disaster.

“The plane was totally broken apart, it was all full of bodies,” the worker told El Pais newspaper.

Two civil guards returning from the scene of the stricken aircraft told the same newspaper: “It doesn’t look anything like a plane – it’s horrific – everything is burnt.

“It’s the closest to hell that I’ve seen. The bodies were boiling hot, we burnt ourselves collecting them.”

Firefighters have now put out the flames at the crash scene and are continuing to dampen down the wreckage.

“The fuselage is destroyed. The plane burned. I have seen a kilometre of charred land and few whole pieces of the fuselage.”

The plane was a shared-code flight with Lufthansa’s LH-255.

Witnesses said the left engine caught fire as the aircraft reached maximum speed and started to lift, causing the plane to crash to the ground and break into two parts.

According to El Pais, the disaster occurred during a second attempt at take off.

An earlier attempt had to be averted after technical issues, which resulted in an inspection of the plane. Passengers were reportedly warned they may need to change planes.

For more news and coverage click on the link @link href=’http://news.sky.com/skynews/Home/World-News/Madrid-Plane-Crash-Dozens-Dead-As-Spanair-Aircraft-Burns-During-Take-Off-From-Barajas-Airport/Article/200808315083058?lpos=World%2BNews_4&lid=ARTICLE_15083058_Madrid%2BPlane%2BCrash%253A%2BDozens%2BDead%2BAs%2BSpanair%2BAircraft%2BBurns%2BDuring%2BTake%2BOff%2BFrom%2BBarajas%2BAirport’>news.sky.com/link.