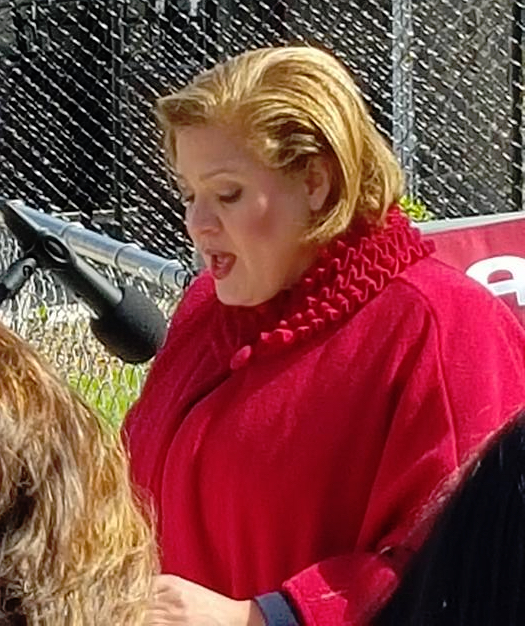 If elected, Cabrera would be the city’s first female Mayor.  Among the current field of eight candidates, she is the only female running.

A Democrat, Cabrera has held the at-large council seat since 2012 and was the first Hispanic woman elected to the body.  A mother of four, Cabrera lives in the Trinity neighborhood.  She is a small business owner and works within the health insurance industry.

“We need new energy and fresh ideas in the Mayor’s office,” Cabrera said.  “Working together, I know we can build and even stronger, more dynamic city.”

“We are one of America’s great cities,” Cabrera said.  “We are known worldwide as the home to Fortune 500 companies.  We are the preeminent city in the First State.  But we must restore Wilmington to her rightful place.”

“We are going to RETHINK, RESTORE, and REBUILD our city”.

“We will change how we do business.  We will invest and rebuild our neighborhoods.  And we will restore civility to our streets”,  Cabrera promised.

Before an assembled crowd of supporters, Cabrera made her announcement on the sidewalk in the 800 block of Windsor Street in Wilmington.  “This general area that is inflicted with crime,” Cabrera said.  “But in this immediate three block area, we have seen private and public investment and revitalization.  It is now a beautiful street that went from Blight to Bright! It is peaceful and beautiful in the midst of all that’s surrounding it.  As Mayor, I want to duplicate this success across our entire city, not just a few particular areas”, Cabrera said.

“My priority as Mayor will be to make Wilmington a safer, more prosperous place to live, work, and raise your kids and grandkids”, Cabrera said.

“I am the candidate best positioned to unite the entire fabric our city – men and women, rich and poor, black, white and brown, the young and our seniors, to move this city forward.”

As a Council member, Cabrera has been an outspoken advocate for public safety reforms.  She’s pushed for tougher action from the Department of Licenses and Inspections to combat vacant and nuisance properties or illegally dumped garbage.  She’s also fought for stronger nuisance laws with tougher penalties.

Cabrera has an extensive history working in Wilmington’s private sector, with charities and non-profit and in public service.

She is a former Director of Events in the Mayor’s Office for Cultural Affairs under Mayor James H. Sills, Jr.

She is also a former Director of Education at The Grand Opera House.

She is a Founding Board Member of the Metro Wilmington Urban League and recently received the NAACP’s Woman of Distinction Award.

The National Association of Women Business Owners named her the Delaware Bridge Builder of the Year, and the YMCA of Delaware named her a Woman of the Next Century.

She is the Delaware State Director for the National Foundation for Women Legislators, and a board member for the National League of Cities’ Women in Municipal Government.  She was also awarded a letter of appreciation and recognition from President Bill Clinton.

Asked about her decision to enter the race now, Cabrera said:

“I have to tell you, I was not jumping to enter this race.  I watched the field develop closely.  I love my city.  I want to see it led by a dynamic Mayor with great ideas and a powerful vision for Wilmington”,  Cabrera said.

“As more and more candidates entered the race, I kept looking for that leader.  I attended the debates.  I listened to their proposals.  I looked at their track records.”

“And here is what I found: Some of the people running seem to have some good ideas, but, even if they were elected Mayor, I don’t believe they have the background and experience to see them through.”

“Others running have many connections and government backgrounds, but they lack the passion and vision that our city needs.”

“I am the only candidate that brings both of those qualities to the table – the passion to build a better city and the knowledge and experience to get the job done.”

Cabrera concluded her candidacy announcement with a question that brought cheers from the assembled crowd:

“Wilmington has been electing Mayors for almost 200 years.  Yet we’ve never had a female Mayor.  I think it’s time!  Don’t you?”