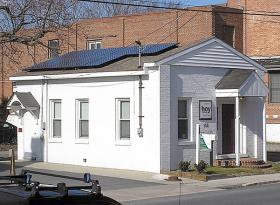 WILMINGTON – Standing next to solar panels at the DuPont Co.’s Chestnut Run Plaza on Thursday, Gov. Jack Markell signed three pieces of legislation into law that encourage homeowners to install solar panels and wind turbines on their property.

The measures, all part of the Governor’s legislative agenda this year, remove obstacles that prevented homeowners from taking advantage of solar and wind power. The legislative package also rewards homeowners and farmers who make that investment by allowing them to sell excess power they generate but do not use.

“My administration’s energy agenda is moving us towards achieving the promise of a green economy—green jobs & careers, opportunities for companies, and savings for residents and businesses—by seizing the opportunities presented by our nation’s commitment to energy independence and the growing concern over climate change,” Markell said.

“These new laws, along with a few additional pieces of legislation that I will sign in the near future, will result in new jobs, money saved and a cleaner environment. Thanks to the steps we have taken over the past six months, we will be able to look back at this as the time when we laid the foundation for decades of economic growth and a cleaner planet for future generations.”

Specifically, the bills Governor signed on Thursday are:

“We all know that we need to generate more energy from solar, and this legislation balances that need and desire with the deed restrictions and covenants that exist in many communities,” said Sen. Harris McDowell, the chair of the Senate Energy Committee and the lead sponsor of the legislation.

“With the increasing price of energy and our ongoing efforts to reduce the impact of fossil fuels, we have to keep pushing the use of alternative energy,” said Rep. Michael Mulrooney, , who chairs the House Natural Resources Committee and is the lead House sponsor of SB 49. “As technology continues to improve, solar power is becoming a real alternative for homeowners. This bill will ensure that future homes can add solar panels without infringing on existing deed restrictions.”

“The more we can do to encourage passive methods of energy generation, the better off our state and our nation will be economically and environmentally,” said Rep. William Oberle, who introduced HB 70.

Senate Bill 85 guarantees that families, businesses or farms that generate more renewable energy than they need will be able to sell back the excess power for a profit. Previously, excess power went back into the grid without the system owner being compensated at all.

Sen. David McBride, the prime sponsor of the legislation, said it “is an important step in our efforts to get environmentally friendly energy and real costs savings for all Delawareans.”

“This bill ensures that those citizens who invest in and pursue energy efficiency and alternative generating capacities in their homes will be rewarded for their efforts,” said Rep. John Kowalko, the lead House sponsor of SB 85. “It is a good correction in policy that will encourage not discourage more participation in alternative energy generation for homeowners.”