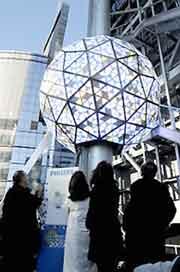 A former President, a would-be President-turned-future-secretary ­of state, the mayor and the hottest boy band in the nation will help ring in 2009 Wednesday night. And so will thousands of cops.

Bill and Sen. Hillary Clinton will stand with Mayor Bloomberg in Times Square and lead more than a million merry­makers in saying goodbye to a trying year.

The Clintons will push the button that lowers the sparkling New Year’s Eve ball during the final 60 seconds of 2008, setting off wild celebrations.

With the Clintons, the Jonas Brothers band and the mayor on hand, not to mention the crush of revelers, cops will have their hands full.

Bloomberg said that the NYPD is ready.