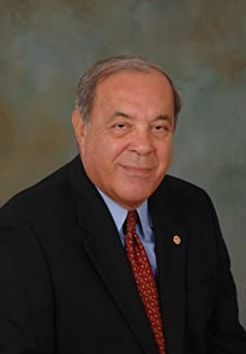 Sixteen years before I was a little two years and nine-month-old kid who tagged along with his 17-year-old-mother, 15-year-old uncle and an ancient great-grandmother on train rides of thousands of kilometers from Mexico City to San Diego, California. It was a Navy town sandwiched between Los Angeles/Hollywood and world famous ‘Sin City” Tijuana, Mexico. None of us spoke English.

The trip from Mexico City: everyone spoke Spanish, the food was Mexican. Everything was normal to me. The women passengers thought I was “precioso” – precious. They gave me candy. How many times did I say “Muchas Gracias,” thank you?

There were men with us. I had no idea who they were. They wore suits; they wore hats and they had pistols in their belts. I didn’t know what kind until after August 11, 1959. The men had taken our passports when they picked us up at our home in the Colonia Roma of Mexico City (the neighborhood in which today’s President-elect has his headquarters). I had no idea who they were. I found out from my mother as she was passing on that they were Presidential bodyguards (like the U.S. Secret Service). She told me the story.

She was 14 when a young handsome upwardly mobile Mexican politician of the ruling party, known these days as the PRI, swept my mother “off her feet.” I was the result. He was elected to the Mexican congress. From there he provided his two families with largesse not uncommon for elected politicians anywhere. He also provided political cover for our family because my great-grandmother had committed the cardinal sin of helping organize what is now known as the Mexican political opposition that brought Mexico into the democratic universe in 2000 when it elected Vicente Fox President of Mexico.

In 1940, however, it was a handful of people like my great-grandmother who risked their lives to oppose the ruling party and campaign for a Mexican Revolution hero, General Juan Almazan (ahl-MAH-zahn). Of course, he lost “93% to 7%” but everyone knew, I have been told, that he probably won over another general – Manuel Avila Camacho, who wasn’t anywhere near the hero that Almazan was or who was as beloved by his troops. Communist goons supporting Avila Camacho roamed the streets beating and killing people while PRI-dominated police stood by watching.

It was in the aftermath of that election and accompanying violence that my congressman father protected us.  He visited us all the time in Mexico City. His home was a hundred miles east of Mexico City high in the mountains.  He was, in fact driving back to us when his car ran off a mountain road and he died. Our protection died with him. The men came early in the morning; they loaded us into cars with one suitcase. They took our passports. They drove us to a waiting train. It was a great adventure for a little boy.

We were going to America, I was told. I didn’t know that my mother was born in San Diego, California. That San Diego birth would be momentous in my life despite neither she nor me knowing it at the time. After all, she was 17, what do 17-year-olds know?

We walked into the USA over a bridge between Mexican Ciudad Juarez and American El Paso without problem because my mother and I were United States citizens. We boarded another train for Los Angeles. This time no one spoke Spanish.

The train was packed with young American men in uniform; they were fighting a war; World War II in which 50 million people died, including some of these young men. They, like the women on the Mexican train, found me delightful because I made faces at them — they laughed and gave me candy, chocolate. There were, I found out later, sailors in black uniforms and white hats, soldiers in what I learned was khaki and men wearing green wool uniforms, “marinos,” (mah-Ree-nohs) I was told, Marines, United States Marines. I had no idea what they were until two years later when I watched the movie-house newsreels showing six U.S. Marines and one Navy corpsman raising an American flag on top of a mountain on an island named Iwo Jima.

All the boys in my Mexican American San Diego neighborhood had someone in the war, some were Marines. I learned from them about Marines and how they landed on islands in the very ocean I lived next to; I learned these Marines fought in jungles against the Japanese who some called the best jungle fighters in the world. If that was so, why did the Marine uncles, father and brothers of my friends win every battle?

Just before my tenth birthday, the Marines made the news again in December 1950, in a country called Korea, at the Chosin Reservoir. There, 17,000 Marines were sent by dumb Army generals to be surrounded by over 100,000 Communist Chinese troops the generals didn’t even know were in Korea. In 30 degree-below-zero weather, snow/ice, little food, bare medical treatment, little ammunition, the Marines fiercely fought off Chinese attacks every night for 17 days. 4385 Marines were killed or wounded with another 7,338 non-battle casualties caused by the cold. (70 percent casualty rate). The Communist Chinese, on the other hand, were so decimated by fierce Marines that they disbanded two of their Army divisions and didn’t reenter the war for over a year. Why, because they were massacred by the outnumbered Marines and their British and U.S. Army United Nations colleagues at the Chosin Reservoir. Nine years later…

Contreras is the author of “The Armenian Lobby & U.S. Foreign Policy” (Berkeley Press) and “The Mexican Border: Immigration, War and a Trillion Dollars in Trade” (Floricanto Press); he formerly wrote for the New American News Service of the New York Times Syndicate – he served in the USMCR (1959-1967)

(Note from the writer: A number of issues are subtly mentioned and discussed in this piece. For example:

2. Being raised  by a single mother in America when the mother comes home without a word of English.

3. How kids learn things from each other

4. How despotism works to rid itself of opposition.

5. How duty to country burns in some people even those not born here.

6. How the U.S. is missing the burning desire for duty and patriotism in a time when only one percent of the population serves in the U.S. military).