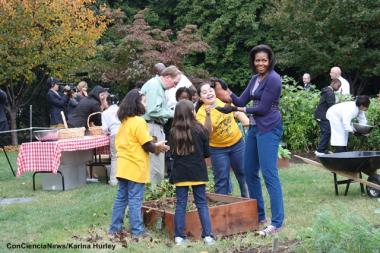 As part of this effort, she has stressed the importance of growing and consuming local products. On more than one occasion, she has visited markets in the capital to show her support.

On this occasion, she proved her point by inviting a group of students to participate in the fall harvest, an event where the White House chefs, along with some officials and special guests, harvest various vegetables produced in the White House gardens.

Obama said that the “White House Kitchen Garden” was created in March this year to promote events which highlight the importance of healthy eating and “knowing how good, fresh food tastes.”

“More than 740 pounds of food have been produced by this small area of land,” Obama said. “How much do you think it costs to plant all this?” Obama asked the students. The responses varied from $300 to $6,000, but none of them hit on the correct answer: $180, $120 for landscaping and the remaining $60 for seeds.

“For less than $200, we have planted enough food to feed not only those who live in the White House, but also we have given plenty of food to our neighbors,” Obama said, referring to various community organizations.

All food harvested by the students will be donated to Miriam’s Kitchen, a food kitchen for low-income people with a focus on the preparation of healthy food. Apart from donations, another goal of the event is to educate children about the relationship between natural food and its health benefits.

More than 20 children participated in the event, most of them African Americans or Hispanics. Both communities are disproportionately affected by weight and obesity problems as a result of a poor diet and physical inactivity.

According to the Centers for Disease Control and Prevention (CDC), in 2008 the prevalence of obesity among Hispanic children of preschool age was 18.5 percent, higher than non-Hispanic white children, Native Americans or African Americans.

One student took the opportunity to tell Obama that he is the main helper in his grandmother’s garden, where he helps her harvest jalapenos. However, many of the children had never gathered crops or tried some of the vegetables they collected, such as sweet potatoes.

After gathering the food, which included more than 75 different types of fruits and vegetables, Obama said goodbye to the children with an important request: “Promise me that from now on you will eat more vegetables,” she said. “Every meal should have them.”