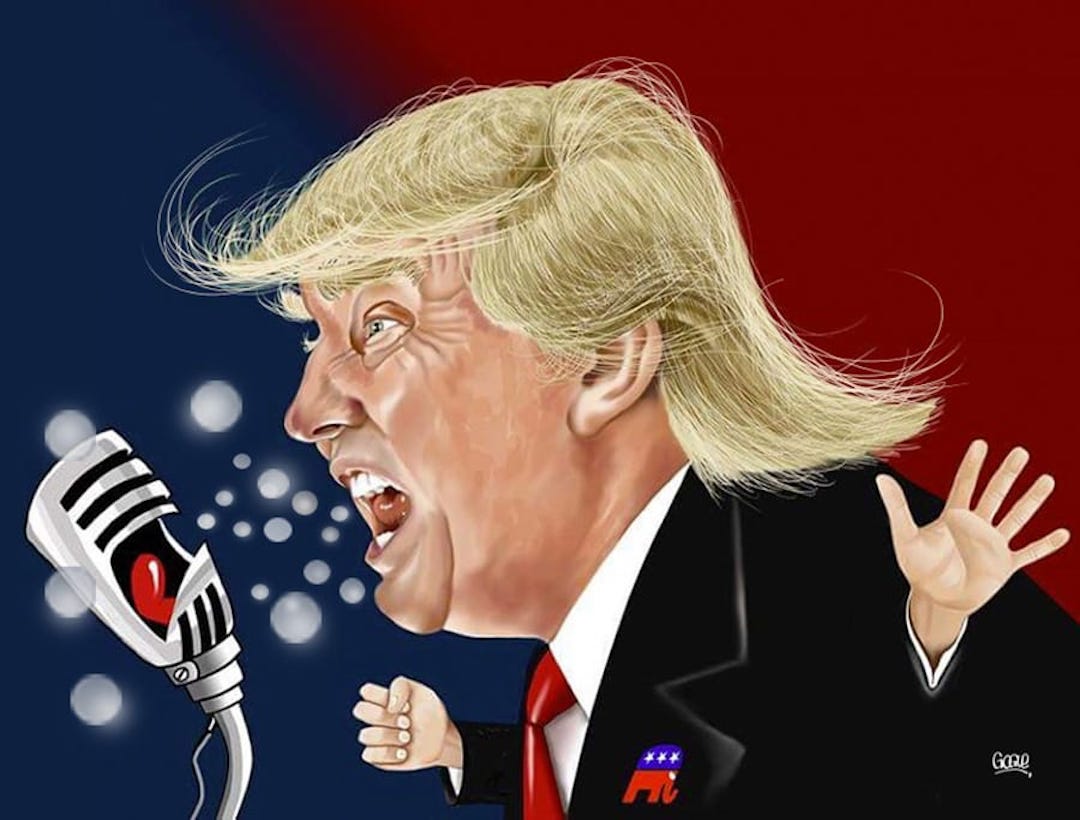 The views expressed in this article are entirely my own and do not reflect the views of my employer or any other organization.

I was at the Trump National in Doral, Florida earlier this month to attend a work event and it was… uncomfortable to say the least. For the past year and a half, I have worked for a faith-based nonprofit based out of Miami. Prior to accepting an official offer, I was made aware of the overtly Christian environment I was stepping into. I made it clear that I am not a religious person, and so long as my views were respected, I would extend that same courtesy. Opening and closing prayers at most meetings, frequent references to salvation versus damnation, and of course, the driving force of enabling the illiterate to pick up the bible would soon account for 40 hours of my week. I did not know it then, but I would be in for a wild, evangelical ride.

Fast forward to the day of the event. As I arrived, police directed traffic to lead a makeshift rally away from the blocked streets at the front gate. My first thought was: I don’t belong here. My second thought was: Am I safe? Later, I realized the dozens of pick-up trucks lining the road just wanted a chance to flash their MAGA flags and honk their horns. I was safe, for now, probably because there was no equivalent anti-Trump attire I could don that would be half as ostentatious as the sea of piercing republican red that surrounded me. The decision to tint my windows proved fortunate as well; No one would spot me in the background of any pictures or videos and misidentify me as sympathetic to the cause. After parking, I approached the small shaded area where guests could wait for the van that would drive us to the entrance. I was the only woman. And, until a couple of men approached the bench speaking Spanish with heavy Cuban accents (diehard Cuban republicans, no doubt,) it took one glance to guess I was likely the only person of color as well. I greeted the group with a transactional “hello,” (which only one person reciprocated) hoping to exchange it for the tolerance of my presence. The mutual discomfort was tactile as we piled into the transport for the awkward ride. Was the tension imagined? Or was I one shade too dark and one genitalia short of acceptance? This is the kind of paranoia I face in the Trump era, and I’m not the only one who took issue with our choice of venue and the message it sent. Less than two weeks after the event, the granddaughter of one of the founders and her husband emailed us to inform us they’d be taking the organization out of their will.

After I arrived and met with my coworkers, I relaxed. Finally, some familiar faces. It didn’t occur to me that some of those very people might be voting to re-elect the man who has used his platform and influence to revert the social progress of The United States of America before ever stepping foot in the White House.

The following week it was back to work as usual. I had forgotten the feelings of being unwelcome in an environment so clearly not designed with people like me in mind: Latina woman, first- generation American born to Colombian immigrants, politically liberal, and earning less than $40,000 per year—definitely paying more than $750 in taxes. Trump National is a known safe space for veiled racist men and their female counterparts, like the middle-aged woman parading past my work booth, toting a designer handbag in one hand and a Pomeranian in the other. Just a few days later, my heart dropped when I heard someone in the office express their support for Trump. And it wasn’t just anyone, it was a Latino.

Republican Latinos in Florida arguably established Miami as their home base since the mass emigration of Cubans during the 60’s, yet the sting of any minority support for Trump in particular feels like betrayal. I’ve felt this disillusion before, sometimes from people who I respected and even liked, but all of their good qualities fall under question when their judgment impels them to side with someone who instructed white supremacists to “stand by” on national television. Do they think immigrant families, like my own, have no place in this country? Or, perhaps, if they are immigrants themselves, maybe just those who don’t assimilate to their biased ideals of what an American should be?

I’ve been grappling with these emotions more often lately. With the elections just around the corner, political debates seem inescapable in both my personal and professional lives. I used to welcome this kind of discourse, but engaging in these conversations nowadays results in either the feeling our nation’s diversity and safety is under attack, or solace when I find someone who shares these fears. It wasn’t always like this. I pride myself on my open-mindedness and to this day, I value the importance of challenging my perspective by meeting people from different backgrounds. Multiculturalism enriches our communities and the world at large, and difference of political opinion is one of the many ways Americans can employ the freedom of speech afforded to us by the U.S. Constitution—so why is someone siding with Trump this election season such a dealbreaker? The answer is complex.

Minority Trump supporters serve as one of the most blatant ironies of American politics. Are they brainwashed into thinking Trump gives a damn about people like them? Or worse yet, are they cognizant of his divisive rhetoric and problematic stances on every issue from climate change to race, but conscientiously giving him a free pass? I’ve heard the excuses, and they’re weak. And it’s not just Latinos—last month a Lebanese immigrant said of Trump’s failure to admonish white supremacists: “He talks too much, that’s his problem,” before moving on to belittle the Black Lives Matter movement. I’ve heard others say we need his economic wisdom because Trump is a businessman first and politician second—yet Trump is notorious for his countless failed ventures from bankrupt casinos to discontinued steaks. The conversational bartering I’ve reluctantly found myself engaging in with Trump’s fanatics is one of picking and choosing which of Trump’s actions are excusable and which can be tabled for another discussion, which never comes. It is frankly a carousel I’ve grown nauseated of riding.

Logic argues that the very people offensively labeled as “criminals and rapists” and “ISIS- affiliated,” by Trump would cast their vote for any other candidate. But logic is hard to appeal to when allegations of sexual misconduct and tax evasion are not enough for even his most casual following to jump ship. And many supporters are under the sad illusion that Trump’s abrasive speech and inflammatory behavior simply does not apply to them, or cannot translate into policy that will affect their everyday lives.

Perhaps it can be said that Trump supporters also fear their way of life is in danger—but for all the wrong reasons. In a day and age where we’ve grown desensitized to a resurgence of hate crimes and xenophobia, it is exhausting to be the voice of reason and remind others that this nation’s founding principles are at stake in a world with Trump as president.

So what’s the best possible outcome for both sides of the political fence? Like any negotiation, a middle ground can be reached. A vote for Biden does not require a voter’s allegiance to future democrats, and it certainly does not mean bipartisanship will come to an end. A republican Supreme Court confirmation is likely underway and republicans will be able to petition for more conservative legislation with or without Trump in office. But first, we must face the harsh truth: Trump does not give a damn about you. Vote wisely.

*Names of individuals have been omitted to protect privacy.

Gabriela Adarve is a freelance popular culture and opinion writer with a background in international affairs.