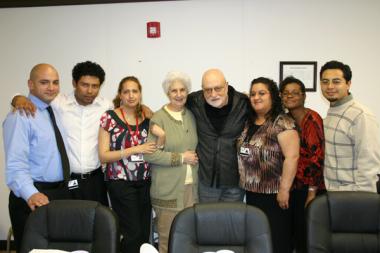 One after another, the men and women who helped turn an idea into a reality rose to talk about what can happen when enough people believe in the old saying, “Yes, you can.”

A decade ago, the La Red Health Center was little more than a hope and a prayer. Its founders aspired to create a medical oasis for the disenfranchised and uninsured. The goal then was to help recent immigrants and the poor.

No one dared dream that La Red would evolve into a highly respected health care facility that would benefit residents of all ethnic backgrounds from across Sussex County. However, on its eighth anniversary year, La Red’s staff took time to reflect on its growth.

Among them were founders of La Red: Dr. Francisco Rodriguez, a Seaford physician, and Gonzalo Martinez, a former community leader who traveled from Chile to attend a special mid-April event.

“What’s amazing about the center is that it was created for a minority but now it serves a majority,” said Martinez, who lived in Lewes before retuning to his home in Santiago.

They talked about La Red Health Center’s evolution from a tiny clinic that saw only 11 patients in its first month to one that treated almost 1,400 patients in March 2009. Those patients sought a wide variety of services ranging from disease management to cancer screening to mental health counseling.

Martinez said plainly that he was in awe of all that has been accomplished in such a relatively short time. But he was most impressed by the commitment of the staff.

“You can hear passion in their voice and see it in their eyes,” he said. “They believe in La Red’s mission.”

A passion for a cause

Gonzalo, a retired lawyer who also helped found several other Hispanic-oriented organizations including El Centro Cultural and La Esperanza, knows what passion looks like. He has seen it in action.

At a time when no one was paying attention to the health care needs of the county’s burgeoning influx of Latin American immigrants, he and Rodriguez realized their idea demanded the nearly impossible. They also knew that what seems impossible to some is only a challenge to others and they set to work.

The Hispanic population in Sussex County had grown by more than 350 percent between 1990 and 2000. Martinez and Rodriguez saw from their daily interactions with immigrants that the newcomers were falling victim to a dangerous medical gap.

They each believed that a low-cost clinic was desperately needed, particularly after the federal government and the state made drastic cuts in Delaware welfare and social service budgets.

Rodriguez shared his concerns about the cuts – and the disastrous effects that would result if health care access were denied to an entire segment of society – with a statewide newspaper in 1996. The rest, as they say, is history.

“It all started with a phone call,” Rodriguez said to the staff at the anniversary celebration. Martinez saw the article and called Rodriguez to say that he too would help ensure that immigrants didn’t fall through the cracks.

“I was thrilled to see that someone else out there acting as an advocate for a group that had been forgotten,” Martinez said.

Together, they convinced the Medical Society of Delaware to fund their humble beginnings. Under the auspices of La Esperanza, they launched La Red. At that point, it was a 24-hour hotline that facilitated access to medical care for people who could not speak English at all or who spoke it only haltingly.

Then they convinced a network of some 25 bilingual physicians to treat patients at discounted rates. The operation was hugely successful but for Martinez and Rodriguez it wasn’t enough. Instead, they sought to expand its services.

La Red Health Center, as its known today, made tremendous leaps and bounds:

• In February 2001, the operation transformed to an independent ambulatory care center funded by the Office of Rural Health Policy. The center clearly filled a gap. The number of patient visits doubled for each of the first three years of the center’s operation.

• In April 2003, La Red Health Center became an independent non-profit organization governed by its own Board of Director made up of community experts from Public Health, hospital administration, and the local business community.

• In April 2005, the U.S. Department of Health and Human Services Centers for Medicare and Medicaid Services designated La Red Health Center as the only Federally Qualified Health Center in Sussex County, Delaware.

Competition is fierce for the Federally Qualified Health Center designation, which enables centers that provide health care in medically underserved areas to get federal money.

Brian Olson, the center’s chief executive officer, said that federal designation was a major turning point for the organization.

That number is expected to grow to more than 6,500 this year.

La Red continues to target the underserved but now that includes a different demographic group.

“We see more and more middle class people who have no insurance and no place to go,” Olson said.

The longer it stays in operation, the more needs that the staff at La Red sees on a regular basis. They have added new services and expanded the staff to almost 50 people. What they can’t find now in their two buildings is space.

“What’s really scary is that we’ve built all of this in rented space. We have no assurance that tomorrow someone won’t say, ‘OK, it’s time to go,’” said La Red Health Center Medical Director Fabricio Alarcon.

The staff at La Red has a bigger vision for the future. Just in the next year it wants to:

Catalina Figueroa, the supervisor of a community outreach program known as Promotoras, told the group La Red Health Center employees are so committed because they see first-hand everyday the need for their contributions.

“We have been able to reach out and touch so many lives,” she said. “We want to keep doing it.”