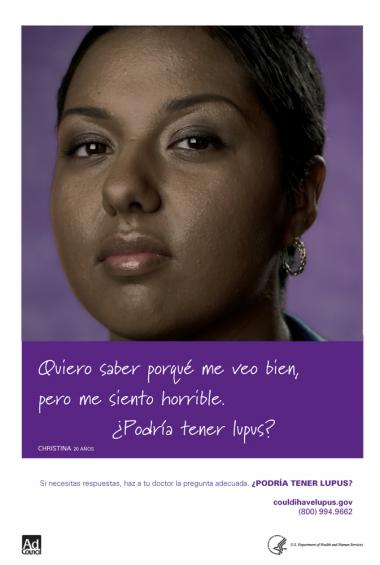 New York (March 31, 2009) /PRNewswire/ — Eighty percent of young women in the United States say they have little or no knowledge of lupus, according to a national online survey released today by the Ad Council.

In an effort to raise awareness of lupus among women who are at greatest risk for the disease, the U.S. Department of Health and Human Services’ Office on Women’s Health is joining the Ad Council to launch a national multimedia public service advertising (PSA) campaign to address the disease.

The campaign has being unveiled by Acting Surgeon General Steven K. Galson, M.D., M.P.H and model Mercedes Yvette in the Great Hall at HHS.

Lupus is a serious national health problem, affecting as many as one of every 200 Americans, according to the Lupus Foundation of America. Ninety percent of those with the disease are women and it is three times more common among minority women.

As a chronic autoimmune disease, lupus causes the immune system to mistakenly attack the body’s own healthy cells and tissue as though they were foreign invaders, such as bacteria or viruses. It is one of the least recognized diseases and one of the most difficult to diagnose. It is an inflammatory disease that can attack many body systems.

The new PSA campaign primarily aims to reach minority women of childbearing age (18 to 44), who are at greatest risk for lupus. The objective is to help these women understand the disease and its effects and help them identify early warning signs so they can ask their doctor for a medical evaluation.

“Despite its prevalence in the United States, lupus is rarely discussed and often misunderstood among women in our country,” said Dr. Wanda K. Jones, deputy assistant secretary for women’s health at HHS. “Through this campaign with the Ad Council, we can significantly increase awareness and help women achieve early diagnosis, which will give them the greatest chance for improved health and long-term survival.”

Without intervention, lupus can lead to tissue damage, organ failure, disability, and in many cases, death. The disease can have a wide range of symptoms, including fatigue, hair loss, painful or swollen joints, fever, skin rashes and kidney problems. However, in the majority of people who are living with lupus, early and effective treatment can minimize symptoms, reduce inflammation and pain, help maintain normal functions and prevent the development of serious complications.

“I took my symptoms seriously and was able to get diagnosed and start treatment early. As a result, I’ve been able to lead a healthy life,” explains Yvette, a Lupus Foundation of America spokesperson. “Taking care of myself is all about finding the right balance – the right doctors, the right meds, the right people and the right workout.”

“Our research found that lupus is not listed among the top health concerns for women and many have minimal knowledge of the disease,” said Peggy Conlon, president and CEO of the Ad Council. “By increasing the level of awareness and understanding about lupus and its symptoms, we can encourage women to seek a medical evaluation early so they can take control of the disease and reduce their risk for serious complications. We are proud to continue our longstanding partnership with the U.S. Department of Health and Human Services for this critical campaign.”

The Ad Council’s survey found that only 18 percent of women are personally concerned about lupus. The majority of respondents expressed concern about other health-related conditions, including cancer (67 percent), depression (61 percent), high blood pressure (58 percent), diabetes (57 percent) and arthritis (52 percent). Furthermore, approximately 29 percent could not correctly define lupus as an autoimmune disease, and 31 percent were not aware that women of childbearing age are most at risk.

Created pro bono by Los Angeles-based ad agency Muse Communications, the campaign includes television, radio, print, outdoor and Web advertising, which will all be available in Spanish. The new ads feature real women in the target audience who have been diagnosed with lupus. They portray women who are experiencing symptoms of the disease but have not yet asked their doctors, “Could I have lupus?”

The PSAs conclude with the tagline, “For answers. For support. For hope.” and direct women to visit a new interactive and comprehensive Web site, www.couldIhavelupus.gov, or call a toll-free number (1-800-994-9662) to learn more about the symptoms and treatment options for lupus and access local resources. The site, which is also available in Spanish, encourages visitors to upload their personal stories and post comments in an effort to initiate a dialogue about the disease among the target audiences.

“The Diaries’ creative is a special body of work that starts and ends with the women that are affected by Lupus,” said Jo Muse, executive chairman and creative director “They spoke to us so deeply and we just wanted the messages to ring true and be impactful.”

Beginning this week, an integrated social media program will extend the reach of the PSA campaign on popular social networking sites and blogs frequented by women.

Also, the Ad Council and HHS’ Office on Women’s Health are engaging a series of campaign partners in the federal government and nonprofit sectors to further the reach of the messages to their groups and members. These include the Lupus Foundation of America (founding partner), Alliance for Lupus Research, American College of Rheumatology, The Black Women’s Health Imperative, Center for Lupus Care, Centers for Disease Control and Prevention, Hispanic Federation, Lupus Alliance of America, Lupus Support Group, National Institutes of Health, National Hispanic Medical Association, National Medical Association and The Wright Group.

The new PSAs and Web sites have been researched extensively and tested with women in the target audiences. The ads are being distributed to approximately 33,000 media outlets nationwide. Per the Ad Council’s model, all of the ads will air and run in advertising time and space donated by the media.

Campaign launch activities will continue throughout the next several months to coincide with Mother’s Day and Lupus Awareness Month, which is May.

The online survey was commissioned by the Ad Council and HHS and conducted in partnership with Greenfield Online from Feb. 28 to March 8, 2009. The sample consisted of 430 women between the ages of 18 and 44 who had never been diagnosed or treated for lupus. Respondents were part of households that are members of a large national opt-in panel managed by Greenfield Online. The Greenfield panel is nationally representative of the U.S. online population. Preset sampling specifications were set to ensure a nationally representative sample of women, reflecting a range of demographic groups.