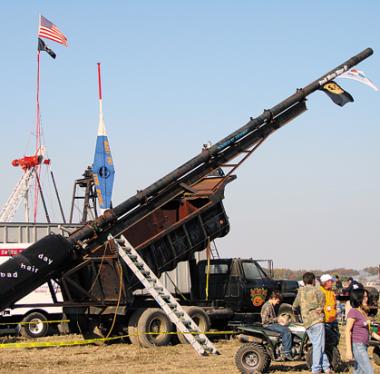 Last weekend was held de Punkin Chunkin (or Pumpkin Chunkin’ or pumpkin chucking) which is hurling a pumpkin by mechanical means over great heights and distances in an attempt to hurl the pumpkin the farthest.

As every year, competing teams constructed and fired a variety of pumpkin-launching devices, including catapults, trebuchets, centrifugal machines, and pneumatic cannons. Contestants competed in divisions against machines of the same type.

This year about 70,000 people (a 30% increase in attendance from last year) went to the Wheatley Farm to watch 2,000 pumpkins launched into the air by contestants.

The runner-up was Old Glory, which blasted a pumpkin
over 3900 feet.

Punkin Chunkin started in 1986 in Millsboro but changed its emplacement due to the increasing space required as the machines are upgraded to fire the pumpkins farther.

Each type of machine competes in different categories, including height, fan favorite, straightness, and most importantly, range. Each launcher counts the best of three shots, one taken on each of three consecutive days.

There was also a carnival for spectators with amusement rides, food vendors and pumpkin recipes in a cooking contest.