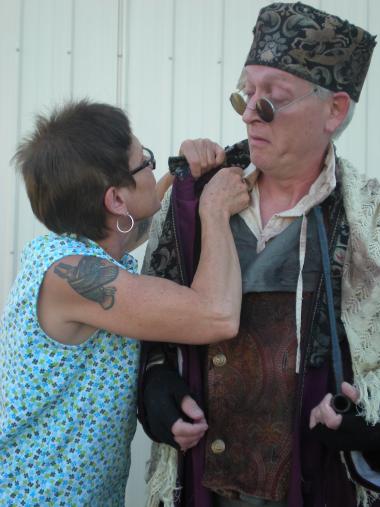 As the new Cape Henlopen High School does not open until September, Clear Space has found a temporary home for their summer production of OLIVER! at Epworth United Methodist Church: the newly-built Church directly behind Tomato Sunshine on Route One. Located next to the Seaside Outlets, the new Epworth building offers ample parking, comfortable seating, handicapped accessibility and air conditioning. Ticket sales have been brisk for OLIVER! and will likely be another huge hit with audiences, just as SOUTH PACIFIC was last summer. OLIVER! tours to three different venues over a three-week span beginning July 16.

The new venue isn’t the only new and exciting update to this production. Just several days ago, the actor who portrayed Fagin in the cast came down with pneumonia, so Doug Yetter, Artistic Director of Clear Space and Musical Director for the production, was asked to take his place. Doug may be best known in the area for his keyboard skills, and added Ebenezer Scrooge to his extensive theatrical resume in Clear Space’s December production of SCROOGE! Doug portrayed Fagin when he was a teenager in an abridged production and now looks forward to this opportunity. “There were so many roles I played when I was obviously far too young for them. Despite the rather unfortunate circumstances which brought me to the stage in this production, I’m glad to have the chance to assay the role at a more appropriate age!” said Doug.

Deb Rhoads, Costume Designer, is putting the finishing touches on the remarkable costumes she has created for the show as well as re-adjusting Fagin’s costume for Doug. “He came by a few hours ago for the fitting,” she said. “The costume really looks great on him, and I’ll be able to finish up some final adjustments by Monday’s dress rehearsal.” With the style of the show, and the poverty of most of the characters surrounding Oliver, she designed and constructed the costumes as new clothing before distressing them by adding mud, paint, and tearing holes in them for an authentic look. “It’s not easy making a beautiful costume that I know will look terrible by the time I’m finished!”

Journey with the talented cast as they re-create London in 1850 and follow the world’s most-famous orphan as his life takes him from workhouse to funeral parlor to a gang of pickpockets. This musical adaptation of Dickens’ famous novel is filled by jovial, lively and odd characters as well as familiar and catchy tunes, including “Consider Yourself,” “You’ve Got to Pick a Pocket or Two” and “As Long as He Needs Me.”

All cast and crew are filled with excitement in this final week before opening OLIVER! The tour begins Thursday, July 16, and Friday, July 17, at 7 p.m. at the Freeman Stage at Bayside, an outdoor venue in Fenwick Island and tickets are $10. Visit www.FreemanStage.org for more information about the venue and outdoor performances. From Thursday, July 23 through Sunday, July 26, the show plays at the new Epworth United Methodist Church on Holland Glade Road with evening shows at 7 p.m. and 3 p.m. matinee performances on Saturday, July 25 and Sunday, July 26. There will be a free ice cream social after the July 25 matinee where the audience will have an opportunity to meet the cast. OLIVER! then heads north to the Schwartz Center in Dover for performances on Saturday, August 1 at 7 p.m. and Sunday, August 2 at 3 p.m. For ticket purchase, venue or pricing information, please visit the website at @link href=’http://www.ClearSpaceProductions.org’target=”_blank”>www.ClearSpaceProductions/link or call the Clear Space Box Office at 302.644.3810.