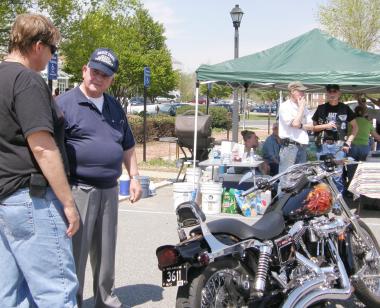 Dover- Motorcycles thundered through the capital city Saturday to remind their four-wheeled friends to share the road.

More than 100 motorcycles took part in the event. In addition to the parade, display of motorcycles and information on the state’s motorcycle safety program outside Legislative Hall

Ennis has been a longtime champion of motorcycle safety and helped broker Delaware’s motorcycle helmet law, which requires drivers 18 and younger and motorcycle passengers to wear helmets. Helmet use is encouraged, but optional for cyclists. Delaware is one of 26 states with a partial helmet law. Ennis and State Rep. Dan Short, R-Seaford, are co-chairmen of the state’s Motorcycle Safety Advisory Committee.

before. We’re holding this to promote motorcycle awareness for other motorists and cyclists,” he said. “We’re also promoting motorcycle safety for cyclists.”

That’s important as the number of cycles here has been steadily increasing in recent years. Registration numbers have gone from 9,789 in 1998 to 24,581 last year.

As the numbers have grown, so have accidents involving motorcycles. For example in 1997, data from the state’s Office of Highway Safety showed there were 198 crashes, eight of which were fatal. Last year, there were 368 crashes including 16 fatal accidents. However, the numbers are down from 2007, which saw 426 crashes, including 17 fatals in the First State. Those numbers mirror national statistics that show a steady rise in both motorcycle crashes and fatalities.

Gary Hilderbrand, one of the event’s organizers, said a great many of those accidents are cause by car and truck drivers who cut off cyclists, try to crowd them off the road or just don’t see them at intersections.

“We’re the little guys out there,” he said. “We’re hard to notice. In fact, if you’re sitting at a stop sign, from some angles, the post can obscure the motorcycle … If an 18-wheeler’s coming they see it, but a motorcyclist, you don’t and that can cause real problems. People need to take an extra second checking intersections for motorcycles.”

Dover Police Cpl. David Minor represented his department’s motorcycle unit in the parade and was watching over the motorcycle show and safety demonstration outside Legislative Hall. He said he hopes events, like this will get other drivers thinking about motorcycles. Dover’s motorcycle unit operates all year and Minor said he’s had more than his fair share of close calls with cars on duty and off work, where he enjoys recreational motorcycling.

“It lets people be aware of motorcycles,” he said. “They need to just realize that bikes are a little smaller and a little harder to see. They need to take a second look, instead of doing that California stop that some people like to do, to look for motorcycles.”

While last year’s gas crisis had more riders using their bikes as primary transportation, the financial crisis slowed sales from 2007’s record setting pace of about $10.7 billion in overall business. In Delaware, that number was estimated at about $23 million. Although prices have come down, Hilderbrand said he expects bike to maintain a strong presence on the road.

“It looks like there are going to be a lot more on the road,” he said. “We just want to bring awareness to the public that we’re here and that all we’re asking is for people to share the road.”

With motorcycle season starting, here are some tips to help cars, trucks and motorcycles share the road safely:

• Give motorcyclists a full lane on the road so they can have room to maneuver safely.

• Remember, a motorcycle’s smaller size makes it easier to disappear in a car or truck’s blind spot, so make careful checks before changing lanes or entering an intersection.

• Road conditions, such as potholes, gravel, wet or slippery pavement, pavement seams, grooved pavement or railroad tracks that are an annoyance for other motorists pose a danger to cyclists so be aware a motorcyclist may need to change speed or shift positions quickly to avoid the hazard.

• Allow greater following distance between cars or trucks and motorcycles to allow cyclists room for emergency maneuvers or stops.