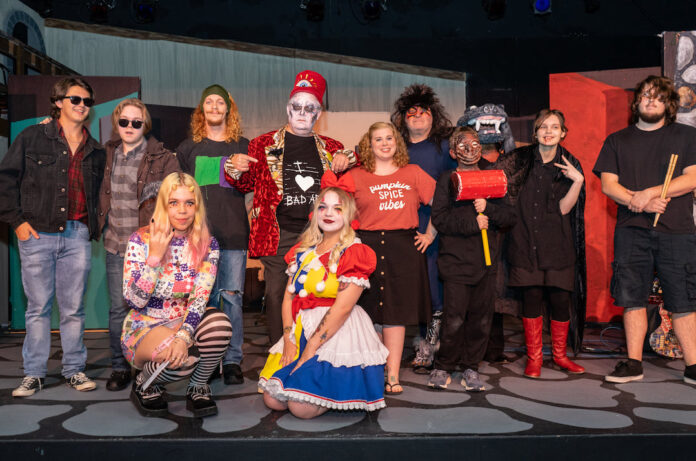 Milford, DE: The popular live show Mr. Moribund’s Theatre of Terror, has announced their summer show at the Riverfront Theatre. The show will feature the 1970 horror classic Equinox, and show dates are Friday, July 29th, and Sunday the 31st.

“This will be our eleventh show,” said show creator and performer W.J. Walton, “which is quite a milestone to reach for a crazy little project that I never knew would become so popular.”

Walton said that this being show number 11 at the same time when the Stranger Things series has once again swept the country is a happy coincidence. “I chose a film that has a few similarities to Stranger Things,” Walton said, “and we’ll be doing our own tribute to the show as well, in our own Theatre of Terror style.”

The show will feature a screening of the film, along with live performances by the Theatre of Terror cast, live music and comedy, raffles, a scary face contest, and audience participation.

“[The] shows are events I look forward to every year. It’s such a great time. Just like the horror hosts you see on TV but live and much more entertaining. Lots of laughs, great music and audience participation. This small-town troupe works hard to give us quality entertainment and it shows in the imaginative details. We’re very lucky to have a show like this in our area. Highly recommended for loads of family fun.”

Tickets are $5.00 per person and will only be sold at the door. Doors open at 7:00pm and the show begins at 7:30 for the Friday show, 5:00 and 5:30 for the Sunday show. There will be no Saturday show due to the Ladybug Music Festival. Walton recommends arriving early. “We have an art show, vendors, and other items of interest in the lobby as you come in, and you won’t want to miss any of the fun.

ABOUT MR. MORIBUND’S THEATRE OF TERROR: Since 2015, Mr. Moribund’s Theatre of Terror has presented a series of live shows at the Riverfront Theatre. The shows are modeled after the classic horror host television programs of the 1950s through today, and feature a classic film from the golden age of monster movies along with comedy sketches, live music and talent performances, costume contests, audience participation, and more. The shows often feature additional attractions, such as a macabre art show, art vendors, face painting, and more, in the lobby and outside of the venue to enjoy before the show.