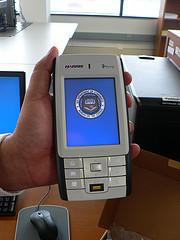 NEWARK, Del. – The New Castle Census Office is open and encouraging Delawareans to prepare for the 2010 Census by engaging their communities to participate in the decennial count.

Following the formal program, managers conducted tours of the office and demonstrations of the hand-held computers to be used in the upcoming Address Canvassing operation in April. This technology is among the ways that the 2010 Census is building upon the success of the previous census. The hand-held computers are equipped with global positioning systems to validate the addresses of every household. The Census Bureau will use these updated addresses when mailing or delivering questionnaires in 2010.

Philadelphia Deputy Director Theodore Roman reflects, “The level of enthusiasm at the opening of the New Castle Census Office was energizing. There are years of preparation before the 2010 Census, and this is the first step in a series of efforts in Delaware to ensure a successful and accurate count.”

Congressman Castle stated, “The 2010 Census is vitally important because it gives the federal government a way to look at our population and determine who will get federal dollars- this includes funding for poverty programs, education, health programs, and the building of highways and more. For this reason, it is important that we count everybody. We have had a good relationship with the Philadelphia Census Bureau in the past and I look forward to continuing that throughout the 2010 Census.”

Representative Miró added, “It is important that every single one of us do the very best to reach out in the community to reach into the different facilities – community centers, schools, senior centers — to find people in the State of Delaware. Immigrants as well… We need to count every single person.”

The Newark office is one of 150 local census offices that opened throughout the country in 2008. The office begins hiring about five hundred Delaware residents to fill office and field positions in the next month.

The U.S. Constitution requires a population and housing count every 10 years. The effort employs some of the most sophisticated technical and operational tools available, as well as a work force of 1.4 million temporary employees to count every man, woman and child once and in the right place. Census results are the basis for congressional representation as well as the distribution of federal, state and local funds totaling more than $300 billion annually. Census Day is April 1, 2010.