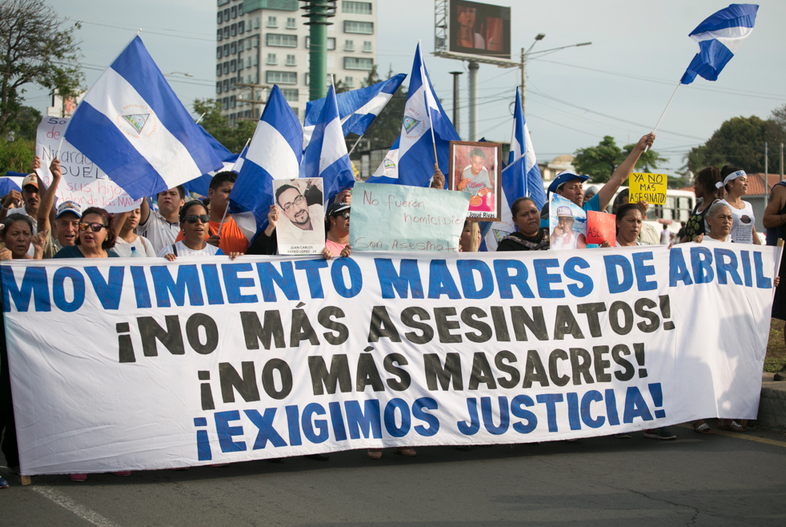 While reporters don helmets to cover violent protests in Nicaragua, human rights and press organizations are calling on the international community to pay attention to attacks on journalists and news media amidst protests against the government of President Daniel Ortega.

Amnesty International, the Inter-American Press Association (IAPA) and the Gabriel García Márquez Foundation for New Ibero-American Journalism (FNPI, for its acronym in Spanish) have been among the organizations to condemn violence that has left almost a hundred dead, including a journalist, according to the Nicaraguan Center for Human Rights (CENIDH).
Memorial to Ángel Gahona, journalist killed in Nicaragua (Photo by Jorge Mejía Peralta is licensed under CC BY 2.0)

On May 29, Amnesty International presented the report “Shoot to kill. Nicaragua’s Strategy to Repress Protest,” which states, among other things, that there were attempts to control the press through “censorship, attacks and threats against the media and journalists by riot police and pro-government armed groups.”

“Attempts to restrict freedom of expression resulted in physical attacks, threats and theft and damage to the audio and video recording equipment of the journalists covering the protests,” the report said.

The report accounts for dozens of attacks on media representatives that occurred between April and the first days of May, including the murder of journalist Ángel Gahona, who was killed by a shot to the head while reporting on a demonstration via Facebook Live.

The home of journalist Ileana Lacayo was raided on April 23 by unknown persons, possibly in retaliation after she accused the police of being responsible for Gahona’s death, according to Amnesty International.

Dora Luz Romero, head of digital information for the newspaper La Prensa, said that the title of Amnesty International’s report to describe the actions of the authorities against demonstrators and journalists is very precise.

“It’s exactly that, what the Amnesty report says: shoot to kill,” Romero told the Knight Center. “They’re accurate shots, they’re in the head, they’re not shooting just to shoot, and it’s not to disperse the protesters, it’s to kill people.”

Romero said her colleagues at La Prensa have suffered assaults and robberies of their equipment. The newspaper has also been the victim of threats and cyber attacks that have thrown its website offline for periods of between five and 30 minutes. In addition, in recent days a fake page of La Prensa on Facebook that disseminated false news began to circulate online.
The offices of 100% Noticias were attacked with stones on May 30. (Screenshot: 100% Noticias)

“There have been defamation campaigns,” Romero said. “They have been very hostile times against the press and journalists. It’s a way in which they want to silence the work that’s being done.”

In the last week of May, repression and attacks against citizens and media in Nicaragua intensified. On May 28, the news agency EFE accused members of the police of beating their video journalist Reneé Lucía Ramos and photographer Jorge Torres while covering protests in Managua.

The Inter American Press Association condemned the violence against Ramos and Torres and against other journalists who were also attacked, and lamented the attack on radio station Tu Nueva Radio Ya, which was attacked with homemade bombs, on the same day.

“We condemn violence against any media outlet and/or journalist,” said Roberto Rock, chairman of the IAPA Committee on Freedom of the Press and Information. “To attack the press is to attack freedom of expression and restrict the right of Nicaraguans to be informed.”

One day later, on Wednesday, May 30, alleged supporters of the government threw stones at the front of channel 100% Noticias and intimidated its staff with mortars with the threat of setting fire to the building, the newspaper reported on its website. That day, Mother’s Day in Nicaragua, marches were held in different parts of the country in honor of the mothers of the people killed in the protests on April 19.

On the same day, armed individuals with their faces covered forcibly entered the offices of Radio Darío in the city of León, 47 miles from Managua. The owner of the station, Aníbal Toruño, said in a video on Facebook that the attackers damaged broadcasting equipment and stole computers. A little more than a month earlier, on April 20, the station suffered another attack when a group of people burned part of the facilities.

The FNPI asked the journalism community on the continent to turn its eyes to Nicaragua, in the face of the deterioration of the social and political climate and the increasingly difficult conditions for exercising critical journalism.

“The call of the Governing Council of the FNPI is to read more about Nicaragua, to better understand what is happening,” the foundation said in a statement published on June 1. “We also propose that more is published; be on guard for information; put more emphasis; take out the magnifying glass and amplify the information. Please look towards Nicaragua and give it the right space in your media to tell what is happening.”
March in solidarity with the Mothers of April (Photo by Jorge Mejía Peralta is licensed under CC BY 2.0)

Dora Luz Romero agreed with the FNPI that it is necessary for non-governmental organizations and media in other Latin American countries to tell the world about the situation faced by journalists in Nicaragua.

“Is this being reported abroad or does the world really care very little about what is going on here?” Romero said. “I think that the work of these international organizations is important so that they can contribute to make visible what is happening in the country.”

After the death of journalist Ángel Gahona, reporters from La Prensa began using helmets to go out to cover protests in the streets of Nicaragua, and the newspaper is in the process of acquiring bulletproof vests, according to Dora Luz Romero.

In the face of violence against citizens and journalists, La Prensa has also made adjustments to its coverage strategy. Now reporters are always accompanied by at least one partner, and the staff is monitored at all times from the newsroom.

“The first thing the journalist is told is that we do not want martyrs here, that we are not going to make them pass that line between reporting and putting their lives at risk,” Romero said.

Despite the extra security measures, the editors have had to decide to stop covering some events that they believe could be very risky for their staff.

“Yes there are things that we have chosen to say ‘let’s get this person out of here,’ even though things are happening because we’re not going to put people at risk,” Romero said.

Photo cover: March in solidarity with the Mothers of April (Photo by Jorge Mejía Peralta is licensed under CC BY 2.0)