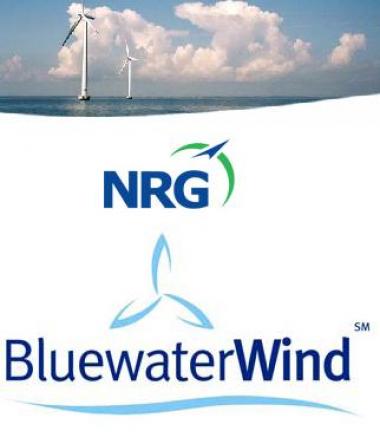 “As public policy trends toward ever-increasing renewable portfolio standards at the state and federal levels, each region of the country will seek to comply with projects that tap the best renewable resource from within that region. There is no doubt that offshore wind is the highest potential renewable resource proximate to the population centers along the eastern seaboard of the United States,” said David Crane, President and CEO, NRG Energy, Inc. “Acquiring an experienced offshore developer like Bluewater, with good projects already in the development pipeline, gives NRG first mover advantage in this potentially lucrative market.”

Bluewater brings an experienced development team currently working on more than seven offshore projects in the Northeast, including projects in Delaware and New Jersey in advanced stages of development. Bluewater has a 25-year, 200 megawatt power purchase agreement (PPA) with Delmarva Power & Light Company that has been approved by the Delaware Public Service Commission and other state agencies. In New Jersey, the company is one of three preferred developers awarded a $4 million rebate from the state to build a meteorological tower, which collects wind data, for offshore projects. Bluewater also has proposed several offshore wind projects in other Northeast locations.

Bluewater’s existing development team will become NRG employees, working out of Bluewater’s office in Hoboken, NJ. The company’s President and founder, Peter Mandelstam, will remain President of Bluewater Wind and also serve as head of NRG’s offshore wind development efforts. “Bluewater Wind is excited to continue developing our portfolio of offshore wind parks with a premier energy generation company like NRG,” said Mandelstam. “By joining forces with NRG, Bluewater Wind will enhance its development expertise, as well as access to capital for the development and construction of these projects. NRG’s commitment to increase its portfolio of low and no carbon generation assets, and its membership in the U.S. Climate Action Partnership, is a good fit with Bluewater Wind’s mission to provide clean, stable-priced, renewable energy.”