The faces are expectant, filled with hope. They’ve all heard about President Obama’s Executive Immigration order, Deferred Action for Parental Responsibility—“DAPA”. They are waiting to hear that they are finally eligible for this temporary, three year immigration “status”, a status that will allow them to legally work in the U.S. under their own name, using a real social security number, one which belongs only to them.

They are waiting to hear that this social security number will enable them to apply for and obtain a valid driver’s license, to obtain automobile insurance and to finally drive without fear of being pulled over for a broken tail light and ultimately winding up in a jail cell, under deportation proceedings. They want—need—to know that the 20 plus years they have invested in the U.S., years in which they have paid taxes while working 80 hours a week at an hourly wage of six dollars and the sacrifices they have made to earn this money, being so far from family, unable to see, hold or touch their spouses and children living outside of the U.S., have finally been recognized. They want and need to know that after so many years of quietly paying U.S. taxes and supporting the U.S. economy they are no longer invisible and no longer have to live in fear—at least for the next three years. I know that what I have to tell them today will divide families. While I will make some happy, I will make even more unhappy, for they are the “forgotten”. Minus the necessary U.S. citizen or Lawful Permanent Resident child born on or before November 20, 2014, they will not qualify for DAPA.

A sea of eyes focuses on me as I begin to speak. Those in the audience listen intently as I explain the need to file taxes as one of the many ways to establish their continuous presence in the U.S. since January 1, 2010 (even though the USCIS on last week’s conference call hinted that this would probably not be a requirement once the final rules were issued). Fortunately, many already know how to obtain an “ITIN”—a Taxpayer’s Identification Number—with the IRS, which is especially important for those who are paid in cash or issued a W-2 form under a name or social security number that is not theirs.

It’s well known in the community that there has been little good news since section 245i ended on April 30, 2001, and all but the strongest of faith have essentially given up on the idea that the U.S. immigration rules would ever offer anything but a ticket home. However, there are still some “believers” in the crowd—Dream Act—DACA kids—who have been able to apply for DACA (Deferred Action for Childhood Arrivals) under the President’s 2012 Executive Action. These DACA kids have been able to attend school, to work and drive legally and to move towards fulfilling their previously “undreamable” dreams. They are even more excited because, effective February 18, 2015, the DACA rules will change to allow more Dream Act kids to apply for DACA status.

Now these children who entered the U.S. on or before January 1, 2010 (the previous date was June 15, 2007) and who are at least 16 years old (unless they are under deportation proceedings and then 15 year olds may apply) and who are now any age (the previous cut-off date required them to be under the age of 31 on June 15, 2012) will be included in DACA. These “kids”, with heads held high, proudly stand up and urgent their elders—those who are the parents of U.S. citizens or Lawful Permanent Residents (“green card holders”), who entered the U.S. on or before January 1, 2010 and are not “an enforcement priority”, to apply for DAPA once the regulations are issued in May.

The crowd filters out. As I expected, some leave happily; others leave disheartened, for despite the media’s take on this “amnesty” (which is not an amnesty), more are left out under the Executive Action than are included. Still, it is something, with the hope of much, much more to come. Más vale un pájaro en mano que 100 volando… 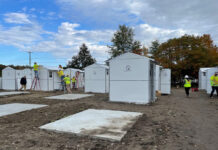 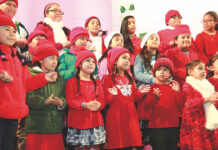