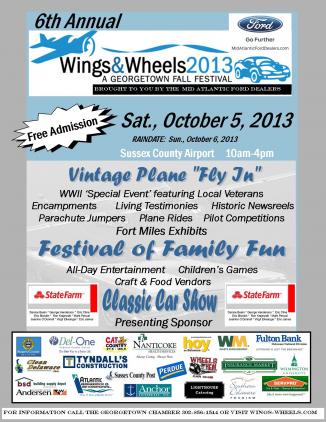 The Sixth Annual Wings & Wheels, A Georgetown Fall Festival is slated for Saturday, October 5, 2013 at the Sussex County Airport in Georgetown, DE. Each year, the event is growing in size and in attendance.

One of the 4 surviving Doolittle Raiders –Lt. Col. Dick Cole– will be in attendance at Wings & Wheels 2013. Dick was co-pilot to Jimmy Doolittle, mission commander. This raid on Tokyo on April 19, 1942, caused minor damage but it forced the Japanese to recall its forces. The B-25 bomber used in the raid, was the largest aircraft at the time from the deck of a carrier –the USS Hornet.