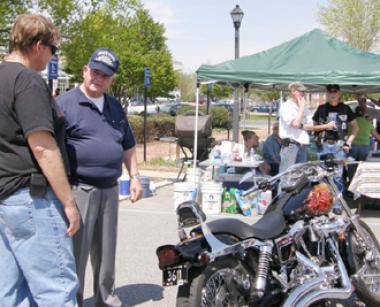 With motorcycle season starting, here are some tips to help cars, trucks and motorcycles share the road safely:

Give motorcyclists a full lane on the road so they can have room to maneuver safely. Remember, a motorcycle’s smaller size makes it easier to disappear in a car or truck’s blind spot, so make careful checks before changing lanes or entering an intersection.

Road conditions, such as potholes, gravel, wet or slippery pavement, pavement seams, grooved pavement or railroad tracks that are an annoyance for other motorists pose a danger to cyclists so be aware a motorcyclist may need to change speed or shift positions quickly to avoid the hazard.

Allow greater following distance between cars or trucks and motorcycles to allow cyclists room for emergency maneuvers or stops.

On April 24, Dover residents will get another reminder as cyclists from around the state and some neighboring states hold their annual parade and bike show, as a warm-up for May, which is Motorcycle Awareness Month in the First State.

“It’s very important for both drivers of motorcycles and other vehicles to start thinking about sharing the road safely,” said Sen. Bruce Ennis, D-Smyrna, co-chairman of the state’s Motorcycle Education Advisory Committee. “That’s what Motorcycle Awareness Month is all about, and I think this is a good way to get people thinking about it.”

Besides the parade and motorcycle show at Legislative Hall, the day features safety demonstrations and safety challenges for riders.

Stewart Crouch, general manager of Diamond Motor Sports in Dover and the citizen member of the education advisory committee, said the instructors, who also teach the state’s motorcycle safety course run the contests to help tune cyclists into the mental aspects of riding.

And, he said, that mindset is important since cyclists were at fault in at least 10 of Delaware’s 14 fatal motorcycle crashes during 2009.

“It is important for motorcyclists to be thinking about safety,” said Crouch, the event chairman. “We really appreciate the fact that the safety instructors from the state are willing to give their time to put on the safety challenges and training.”

The training becomes more important as many cyclists, who have been off the road for years, get back on bikes.

“They’ll think: ‘I don’t need any training. I rode back in my 20s and I know how to do this,’” Crouch said. “But training is important to refresh your memory and, for new cyclists, to help avoid picking up bad habits that can be hard to unlearn later on.”

House Minority Whip Daniel Short, R-Seaford, is the education committee’s other co-chairman. He said the emphasis on awareness is even more important as more cyclists are taking to the roads.

“The number of motorcycles on the road has been steadily increasing in recent years, partly because they’re an economical form of transportation in this depressed economy,” he said. “So we need to do everything we can to help promote awareness and safety.”

Andrea Summers, a program manager for the Office of Highway Safety, said the timing of the event and awareness campaign is important as more bikers are taking to the roads.

“As the weather improves, more and more motorcyclists are hitting the roads so this is a great time to remind both drivers of passenger vehicles as well as motorcyclists to be extra attentive and share the road,” Summers said.

“We are very thankful for our ongoing partnership with the motorcycling community through the Motorcycle Rider Education Advisory Committee. Their feedback has been extremely helpful in developing more effective awareness tools.  A motorcycle is one of the smallest vehicles on our roads, and riders are especially vulnerable in crashes so we want to do all we can to ensure their safety.”

Besides the event and billboards, radio stations around the state will use the month to air public service announcements reminding motorists to share the road. While it’s hard to gauge the effect of the campaign on accident rates, Ennis said he thinks the whole effort works.

“It is hard to put a number on it,” Ennis said. “But I think the more we do in different ways to make people aware that they need to be aware that motorcycles are out there, the more it sinks in and it makes thinks safer for everyone.”

What: A parade from William Henry Middle School to Legislative Hall, starting at 11 a.m. [Sign up from 9:30 a.m. to 10:30 a.m. at the school] followed by a judged motorcycle show, safety demonstrations and riding contests at Legislative Hall. Motorcycle judging begins at 12:30 p.m. with award presentations at 2 p.m.