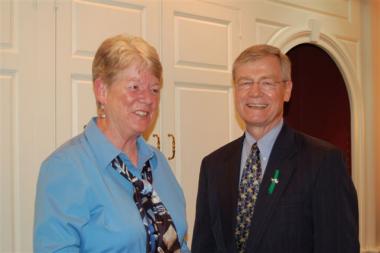 Peterson, D-Stanton, won the group’s Good Government Award for her effort to get House Bill 1 approved. In presenting the award, James Browning praised Peterson for her relentlessness and savvy in getting the new law on the books.

“Sen. Peterson should receive two awards,” Browning said, “one for championing the cause of opening the Delaware General Assembly to the public — and another for the parliamentary maneuver she used to get the bill passed.”

In late May, Peterson, the bill’s prime Senate sponsor, took the unusual step of asking that the Senate’s rules be suspended to force a vote on the bill, which had been voted out of the Senate Executive Committee but was waiting on the Senate’s “Ready List” of released legislation that had not yet been scheduled for a vote. Typically bills remain on the list until the chairperson of the committee that reviewed the legislation asks that it be placed on the agenda.

While Peterson didn’t get a vote that day, she won a promise that the bill would be considered when the Senate returned from its budget drafting break. That promise was honored and on June 2 the bill cleared the Senate on a 20-0 vote. Peterson had been working on ending the exclusion since she took office in 2003 but had been stymied by Senate rules allowing bills to be held in committee without debate or a vote.

That so-called “desk drawer veto” power was largely removed when the Senate passed its operating rules in January. Peterson, whose efforts to open government have been endorsed by Common Cause, said she was honored to receive the award.

“I am honored to receive this honor from Common Cause – an organization dedicated to fairness, honest, integrity and accountability in government at all levels,” she said.