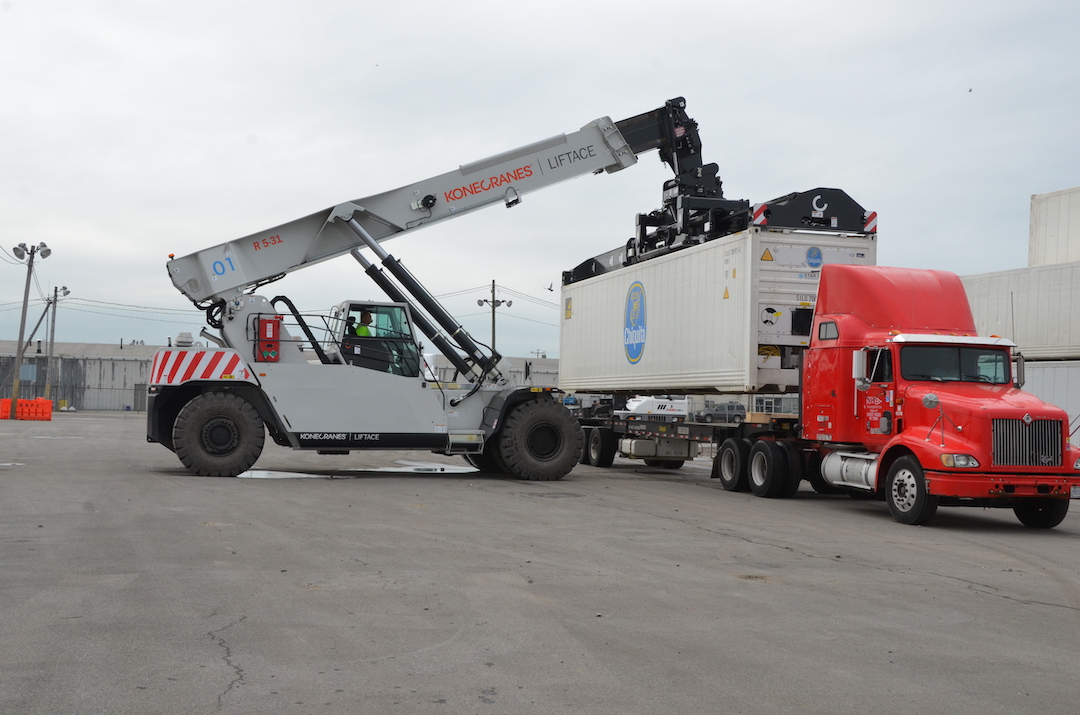 This delivery is part of a larger order, which includes nine 41-ton Rubber Tired Gantry (RTG) cranes, and is part of the $500 plus million investment into the Port of Wilmington and a new container terminal development at Edgemoor.

Eric Casey, CEO of GT USA Wilmington, said: “The introduction of this equipment will support the efficiency, overall productivity and operational capabilities at the port as well as aiding our goal to continuously improve our customer service levels.”

The three new reach stackers, which are capable of stacking containers five high arrived at the Port of Wilmington by the 26th April and each unit was delivered in four separate sections (the boom, the chassis, the spreader bar and the counter weight). Assembly of the machines began on April 29 and all three machines were completely assembled and functional by May 3.

“All three machines passed commissioning and have been introduced into daily operations. It is still very early to determine the full impact of the equipment on day to day operations; so far, the machines are working tremendously well and we are pleased with their performance,” said Eric Casey.
—–
About the Port of Wilmington, Delaware
Founded in 1923, the Port of Wilmington is a full service Mid-Atlantic seaport on the Delaware River strategically located to provide overnight access to 200 million North American consumers. Wilmington ranks as North America’s top banana port and the nation’s leading gateway for imports of fresh fruit and juice concentrates. The Port was one of the originally certified ‘360 Quality’ marine terminals in the United States, underscoring its high- quality handling standards for perishable cargo. An economic engine for the State of Delaware and the region, business activity at the Port creates over 5,900 family sustaining jobs and annually generates $436 million in business revenue, $409 million in personal income and $41 million in local taxes. The Port is operated by GT USA Wilmington, LLC. For further information, visit www.portofwilmington.com

About GT USA
GT USA is the U.S. division of Gulftainer, the world’s largest privately-owned independent port operator and logistics company with operations and business interests in the Middle East, the Mediterranean, Brazil and the United States. GT’s presence in North America expanded in 2018 with the signing of a 50-year concession agreement with the state of Delaware to manage and operate the Port of Wilmington, a deep-water port and marine terminal serving the Eastern Seaboard. The company’s first venture into the USA came in 2014 with the signing of a 35-year agreement to operate Canaveral Cargo Terminal, a multi-purpose cargo and container terminal in Florida. For more information, visit www.gulftainer.com/US