(Para leer la versión en español ir a Noticias Relacionadas).
WASHINGTON, DC – Today, at an event honoring Small Business Owners of the Year from across the country, the President will urge Congress to pass a Small Business Jobs Package, including a proposal he put forth in early February to create a new Small Business Lending Fund to provide small businesses with the tools to access capital so they can grow and hire.

Earlier this month, the President sent legislation on the Small Business Lending Fund to Congress earlier this month, along with a new state small business credit initiative that will help expand lending for small businesses and manufacturers at a time when budget shortfalls are forcing states to cut back on lending programs. Today, the President will urge the House and Senate to move quickly on these and other proposals that encourage investment in our nation’s small businesses, which are crucial to our efforts to create new jobs across the country.

The President’s remarks as prepared for delivery are below:

Good afternoon, and welcome to the White House. This is the beginning of National Small Business Week, which every President has recognized since John F. Kennedy started the tradition in 1963. And with us are some of the most successful, hardworking entrepreneurs from across America. Each of you has distinguished yourself as the Small Business Owner of the Year in your state or region, and later today the national winner will be announced. But all of you should be extremely proud of what you’ve accomplished this year. I know I am.

Being a successful small business owner isn’t just about collecting a profit or outperforming your competitors. It’s about contributing to the success of this country’s economy. It’s about securing your piece of the American Dream.

What has always distinguished us as a nation is the belief that this is the place where anyone with a good idea and the will to work hard can succeed. It’s the belief that has brought millions to our shores, and carried us through even the toughest economic times.

And it’s how small businesses begin. Maybe someone finally decides to take a chance on his dream. Or maybe a worker decides it’s time she became her own boss. Either way, these entrepreneurial pioneers embody the spirit of possibility, the tireless work ethic, and the simple hope for something better that lies at the heart of the American ideal.

You’ve opened the mom-and-pop stores that have led to some of America’s biggest, most successful companies. You’ve launched technology companies – software and IT services that have redefined the marketplace. And you create two out of every three new jobs in this country. Two out of every three. That’s why small businesses aren’t just the backbone of this economy – you are the driving force behind this recovery.

Right now, a series of additional tax incentives and other steps to promote hiring are taking effect. Because of a bill I signed into law a few months ago, businesses are now eligible for tax cuts for hiring unemployed workers. Companies are also able to write off more of their investments in new equipment. And as part of health reform, 4 million small businesses recently received a postcard in their mailboxes telling them that they could be eligible for a health care tax cut this year. It’s worth perhaps tens of thousands of dollars to a company. And it will provide welcome relief to small business owners, who too often have to choose between health care and hiring.

I also want to say a few words about what the Small Business Administration has been doing to help those workers and business owners who’ve been affected by the oil spill in the Gulf Coast. From the very beginning of this disaster, the SBA has acted quickly to assist fishermen and fishing-dependent small businesses. They’re offering low-interest loans and deferrals of existing loans. And while small businesses are encouraged to file claims with BP, these loans and deferrals can provide much needed temporary assistance.

All of these steps are making a real difference in the lives of the people who own and work at small businesses all across America – including the people here with us today.

I just met with Trapper Clark and Tom Sturtevant, who are the state of Maine’s Small Business Owners of the Year. They started a company that manufactures aluminum trailers about four years ago with twenty employees. They’ve grown rapidly over the last few years, and that growth has been supported by a Recovery Act loan from the Small Business Administration. They also got some fees waived. And today, they have 85 employees, are planning to add another 15 by the end of this year, and hope to add another 30 by the end of 2011.

Frank and Donna Masley are also here with us today. They’re Delaware’s Small Business Owners of the Year. Ten years ago, they launched a glove-making business to provide flexibility and protection for our men and women in uniform. When they won a contract to supply gloves for soldiers in Iraq and Afghanistan in 2009, they received a Recovery Act loan through the SBA and saved thousands on fees. It was that loan that allowed Frank and Donna to rehire some employees who had been laid off during the recession, and today their business is growing and thriving once more.

So many people who are here today have stories just like this. Their success isn’t the result of a heavy-handed government. It’s the result of a government that lends a helping hand – that complements the sheer grit and determination of America’s small business owners. And I believe we need to do even more to give these men and women a boost.

That’s why I’m calling on Congress to pass small business jobs package as soon as possible. This legislation should ensure that credit worthy small business owners can get the capital they need to expand and create jobs. It should include needed tax relief, like our proposal to completely eliminate capital gains taxes for those making key long-term investments in small businesses. It should include expansions of vital Small Business Administration loan programs that are needed now more than ever. And it should include two important lending initiatives that I recently sent to Congress.

The first initiative is the $30 billion Small Business Lending Fund I called for in my State of the Union address. This fund would target only small community and neighborhood banks, and it would help these institutions increase lending to small businesses. The second initiative is the new state small business credit program that we recently proposed – an initiative that will help expand private lending for small businesses and manufacturers at a time when budget shortfalls are leading states to cut back on vitally important lending programs.

I am very pleased that elements of this small business jobs package have already passed the House Financial Services Committee last week, and I know the Senate is working on the issue as well. I urge both chambers to act on these proposals as soon as possible. This shouldn’t be a partisan issue. This shouldn’t be an issue of big government versus small government. This is an issue of putting our government on the side of the small business owners who create most of the jobs in this country. It’s about giving them tax cuts and loans so they can keep growing and keep hiring. It’s about unleashing the great power of our economy, and the ingenuity of our people. In so many ways, each of you here today have shown that ingenuity as you’ve successfully navigated your companies through an extremely difficult time. You should be very proud of that achievement, and know that you as you continue that journey, you will always have a fierce advocate in your President and your government. Thank you, and congratulations. 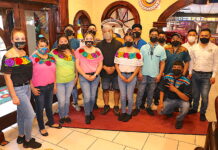