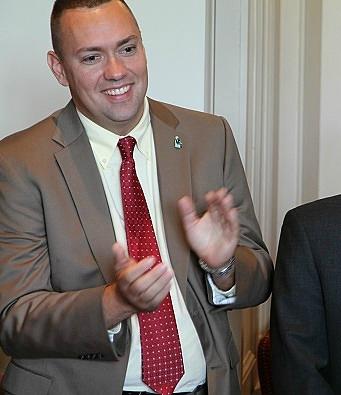 The former Mayor of Georgetown from 2010-2012, Sen. Pettyjohn has also served on the Georgetown Town Council. He was born in Sussex County and attended Sussex Central High School and the University of Delaware.

He was elected to serve in the Delaware State Senate in 2012.

In this Q&A, Sen. Pettyjohn reflects on the 2014 legislative session, which adjourned July 1. He also looks ahead to 2015, and adds a little insight into his life outside of Legislative Hall.

Q: What are your thoughts on the 2014 legislative session?

I give the 147th General Assembly a “C” rating. Significant time and energy was spent on issues of social importance while our state’s economy continued to sputter. Improving the economy, creating an environment where jobs can be created by business growth, and people can earn a decent wage are areas that the General Assembly (as a whole) did not place nearly enough focus on in 2014.

Q: What was a personal highlight for you?

My personal highlight was the passage and signing of HB158, which provides health care coverage for the children of law enforcement officers who died in the line of duty. As many of you know, I was a member of the Georgetown Town Council when Patrolman Chad Spicer was killed. Our officers know that the job they do is dangerous, and it’s a risk that they and their families accept. When the unthinkable happens to them, I believe it is our duty to help care for their families, and this bill that I prime sponsored in the Senate does that.

Q: How did this session compare to other years?

This year did not seem as hectic as years past. Before I was a member of the General Assembly, I spent significant time in Legislative Hall on various issues. Thinking back to previous years, there was more energy then. With the lackluster economy and the tough budget the state faced this year, I think that the general mood was more subdued in the last days of the session.

Q: What are you looking forward to accomplishing when the General Assembly reconvenes in January?

Taking a serious look at our economic condition. With a good economy, other areas in the state will clear themselves up. Medicaid costs will decrease, revenues will increase, there will be less pressure for funding from various non-profits. A better economy will help improve the quality of life for all Delawareans; as the benefits go far beyond the state’s budget. Crime will decrease, retail and service sectors will flourish, and more opportunities will be available for people.

Q: What have the Pettyjohns been up to this summer?

The idea that while we are not in session we aren’t busy can’t be further from the truth! We have been busy on the family farm near Georgetown. We’ve also been helping constituents with concerns and attending events throughout the district. In my spare time I’ve been enjoying quality time with the family.

Q: How can constituents share their thoughts and ideas with you over the next few months?