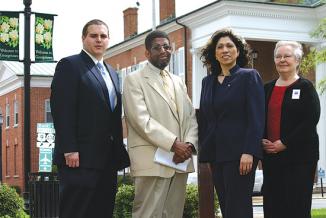 Georgetown, DE – “We are here, we are part of the process,” said Sandra Bucay at the press conference held on April 27 at The Circle in Georgetown.

After the Census 2010, the election districts must be adjusted by law around the country to reflect the population reported.

The Hispanic Community Redistricting Task Force (HCRTF) announced at the press conference the formation of its Sussex County Committee and the role it will play assisting communities that choose to become involved in the redistricting process. They want this process to have public input and to represent the different communities of interest involved.

Among other things, the group is looking at different alternatives for redrawing the 37th representative district in trying to keep the town of Georgetown together.

The first round of public comments ends at the end of April. The process must be completed by June 30, 2011, with the General Assembly’s vote of final Senate and House district maps.

HCRTF was represented at the conference by Sandra Bucay, member of task force and President of First State League of United Latin American Citizens Council (LULAC), Mark Brunswick, a lobbyst and task force member, Craig de Mariana Aleman, a Georgetown business man, and Sandy Spence, member of the Board of Directors of the League of Women Voters-Delaware.