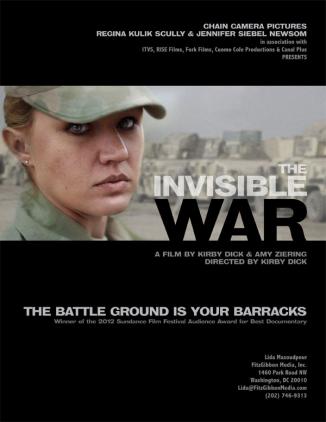 The Rehoboth Beach Independent Film Festival (November 7-11) will feature one of the most talked-about documentaries of the year: “The Invisible War.” As ranks of women in the American military swell, so do incidents of rape.

An estimated 30 percent of servicewomen and at least 1 percent of servicemen are sexually assaulted during their enlistment and not by the enemy, but at the hands of fellow soldiers. With stark clarity and escalating revelations, “The Invisible War” exposes a rape epidemic in the armed forces, the institutions that perpetuate it, as well as its profound personal and social consequences.

We meet characters that embraced their service with pride and professionalism, only to have their idealism crushed. Their chilling stories of violent sexual assault become even more rattling as they seek justice in a Kafkaesque military legal system. As a courageous few defy victimhood, they face their most challenging fight yet: penetrating a closed circuit where officers collude, cases are routinely swept under the rug, and few perpetrators are tried or convicted. The film shows that casualties of war rage beyond the battlefield. [2012 US, Runtime: 93 minutes, Not Rated].

Winner of this year’s Audience Award at the Sundance Festival, this eye-opening exposé will be screened three times during the five-day festival: Wednesday, November 7 at 5:50 pm; Friday, November 9 at 2:35 pm and Saturday, November 10 at 2:05 pm. For information about purchasing tickets, visit www.rehobothfilm.com.

In addition to the screenings, a panel discussion will take place on Sunday, from 9:00 to 10:30 am in the upstairs screening room at Movies at Midway. This special event will feature key figures in the ongoing efforts to prevent, expose, and prosecute assaults against military personnel. The panel discussion is free and open to the public. This event is made possible through the sponsorship of the American Association Delaware and AAUW Coastal-Georgetown. AAUW is the American Association of University Women, known for breaking barriers for women and girls, through advocacy, education, philanthropy and research. It’s a community that breaks through educational and economic barriers so that all women have a fair chance.

The Rehoboth Beach Independent Film Festival is an annual event that presents approximately 100 American and international, feature, documentary and short films. The film screenings all take place at Movies at Midway on Coastal Highway in Rehoboth Beach. Information can be found at the Rehoboth Beach Film Society website: http://www.rehobothfilm.com, or by calling the Film Society office at 302-645-9095 ext. 1.