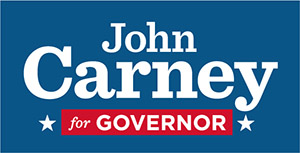 WILMINGTON – Rep. John Carney today issued the following statement announcing his intention to run for governor and the creation of a gubernatorial campaign committee:

“I had intended to support Beau Biden as our state’s next Governor and continue my work in Congress. Beau knew there are big challenges facing our state — and he would have been the man to meet them. Like so many across our state, I wish he’d had that chance.

Yet, a season after Beau’s passing, we’re confronted with the fact that those same challenges Beau was ready to face still loom large along our state’s horizon. And someone has to step up to meet them.

After many conversations with my family and the people I represent, and much reflection, I’ve decided to ask the people of Delaware to give me the chance to tackle these challenges as our state’s next governor.

I do not envision conducting an active gubernatorial campaign until next year. There will be plenty of time for that as we get closer to the election, and there’s too much important work to do in Congress right now. That said, the reality of modern campaigning requires that certain planning activities be conducted well in advance of Election Day. That’s why today I’m expressing my intention to run by filing a campaign committee to enable me to begin the process of seeking the governorship. For now though, I intend to stay focused on the work I was elected to do in Congress — a position I feel extremely privileged to hold.”