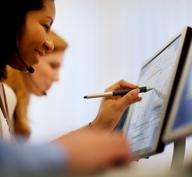 (NewsUSA) – Despite improving economic data pointing to a global recovery, unemployment remains at the highest levels since 1983. For those looking for work today, risk has become an important criteria in their decision-making.

One industry that is considered to be relatively recession-proof and actually growing is information technology (IT). For example, according to the U.S. Department of Labor, technology job opportunities are projected to grow at a faster rate than jobs in all other professional sectors, or up to 25 percent over the next decade.

However, IT still has a long way to go when it comes to its hiring practices, especially with regard to women. According to the National Center for Women and IT, the number of women in IT is the lowest since the 1980s. Meanwhile, the percentage of jobs held by women in almost all other sciences has increased significantly. Furthermore, women already employed in IT are leaving at an alarming rate: 56 percent of women leave at the mid-level point.

“Technical women value professional development above all else, yet many IT companies don’t foster career advancement programs, says Telle Whitney, president and CEO, Anita Borg Institute for Women and Technology (ABI). “Companies should invest in career development practices as well as provide mentoring and networking opportunities for women, which could also help achieve greater gender balance in the workplace and encourage women to stay in more senior roles.

Some companies, such as CA, Inc., recognize the need to support and retain women in IT. Today, approximately one-third of CA’s total workforce is female, which compares favorably with the technology industry average. CA sponsors various programs designed to mentor women and help them to network with each other. CA also partners with ABI and participates in the annual Women Leadership Conference in New York.