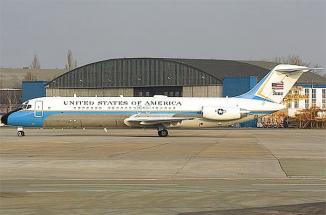 Dover, DE – A VC-9 jet that served for thirty years transporting presidents, vice presidents and first ladies will fly in to take its place at the Air Mobility Command Museum.

At approximately 1 p.m. Aug 18, a rather distinctive aircraft will be landing at Dover Air Force Base, Del. Aircraft that transport our nation’s most senior leaders, from members of Congress to the President, are painted in a distinctive light blue, white and polished aluminum scheme.

Serial number 73-1682 was assigned to the 89th Wing at Joint Base Andrews; their mission is to support the president and other distinguished leaders. It is a twin-engine jet that can fly at 565 miles per hour at 35,000 feet. The interior is configured with seating for support staff and a conference area for in-flight meetings as well as an extensive communications suite.

Among the many dignitaries transported were Former Presidents Ronald Reagan and Bill Clinton, making it Air Force One when transporting the president. Mostly, it was used by Former Vice Presidents George H. W. Bush, Dan Quayle, and Walter Mondale as Air Force Two.

In 2005, it was transferred to the USAF reserve when the Boeing 757 took its place in the Presidential Fleet. It will be delivered by a crew from the 932nd Airlift Wing from Scott AFB, Ill.

The arrival ceremony is open to the public. Please arrive a half hour early. Parking and admission is free.

Access to the museum is off Delaware Route 9 just a half mile from Exit 91 of DE Route 1 south of the base. Visitors can follow the AMC Museum signs for easy access.

Museum hours are Tuesday through Saturday from 9 a.m. – 4 p.m. Admission and parking are free and photography is welcome. Adults and children of all ages are encouraged to come and enjoy learning about the history of your United States Air Force. Call 302-677-5938 for more information.