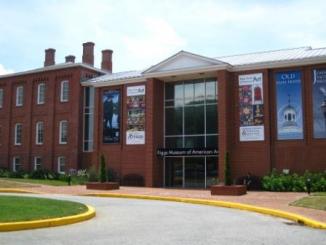 Dover, DE – Looking for family-friendly activities once the holiday celebrations are over? Mark your calendars for the Biggs Museum Family Movie Night Series, starting on Saturday, January 4, 2014 with the hit movie Wreck-It Ralph.

This popular program allows the public to enjoy three, FREE, family-friendly films inside the Museum’s newly renovated Grand Gallery. The program will begin at 6:00 p.m. with a special museum flashlight tour (geared for families and children alike). The movies begin at 6:30 p.m.

Descriptions of each film are available below. Please bring your own seating, blanket, or sleeping bag, and snacks. Pre-registration is not-required. Family movie nights are made possible in part by funding through the Kent County Fund for the Arts and the Delaware Division of the Arts.

Family Movie Nights at the Biggs Museum, in January 2014 will feature three family-friendly films on the first Saturdays of January, February and March. Enjoy a free showing of a family-friendly movie and flashlight tour of the permanent collection specifically geared towards families.

Wreck It Ralph: Wreck-It Ralph longs to be as beloved as his game’s perfect Good Guy, Fix-It Felix. Problem is, nobody loves a Bad Guy. Ralph comes up with a plan but soon wrecks everything, and accidentally unleashes a deadly enemy that threatens every game in the arcade. Ralph’s only hope is a young troublemaking “glitch” from a candy-coated cart racing game who might just be the one to teach Ralph what it means to be a Good Guy. Rated PG.

Planes: From above the world of “Cars” comes “Disney’s Planes,” an action-packed animated comedy adventure featuring Dusty, a plane with dreams of competing as a high-flying air racer. Rated PG.