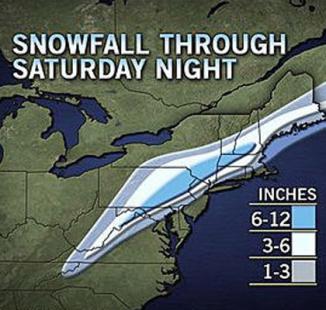 The storm will hit hard and fast, traveling from southwest to northeast over the mid-Atlantic and New England in less than 24 hours.

The heaviest snow from the storm will stretch from along the Virginia/West Virginia border through a large swath of central and eastern Pennsylvania to southeastern New York state, northwestern New Jersey, northern Connecticut, central and western Massachusetts to southern New Hampshire and southwestern Maine.

In these areas and others over the interior Northeast, the snow will come down hard enough to accumulate on the roads making for slippery driving. The worst conditions will be in the hilly areas and the mountains, where slightly lower temperatures are in store.

Thousands of trees could come down, and over a million people could be without power. Some rural roads could be blocked for days by fallen trees. Driving or walking through wooded areas during and immediately following the storm could be dangerous.

Thunderstorms could accompany the snow, adding to the drama.

While the heaviest accumulation will miss the I-95 cities from Washington, D.C., and Baltimore to Philadelphia, New York, Providence and Boston, some wet snow will fall on the heart of the downtown areas and can cover rooftops, trees and grassy areas. Streets in the downtown areas of these cities will be mainly wet.

Because of the intensity of the rain and snow, with increasing winds, expect flight delays and cancellations in the Northeast and ripple-effect delays elsewhere throughout the nation.

the coast of the mid-Atlantic and the immediate southern and eastern coasts of New England.

The storm will turn into a “Halloween Weekend Screamer” in New England. Not only will some communities be battling problems from heavy snow, but also dramatically increasing winds that will also down trees and wires.

Powerful northeasterly winds will cause coastal flooding along east- and northeast-facing shorelines of New England. For part of the region, this could be an Irene with snow.

It’s Not a Halloween Prank

Snowfall during October is not uncommon in the Northeast in general, but when it does occur it typically only falls on a very narrow swath, high elevations or a relatively small patch of land.

According to Expert Senior Meteorologist Henry Margusity, “During this storm, the extent of places that may receive 6 to 12 inches is unprecedented.”

Unlike many storms which tend to underachieve, this one will overachieve and is likely to be a record-breaker.

This storm will catch many people off guard because of its intensity and fast-hitting nature.

The forward speed of Saturday’s storm is in contrast to another storm that hit the Northeast in the days surrounding Halloween in 1991.