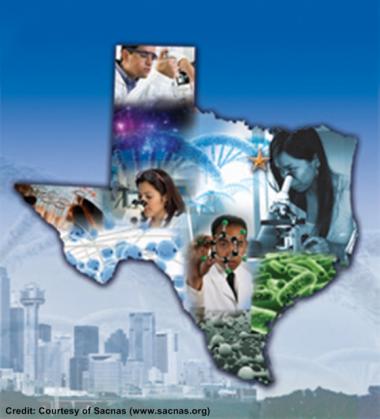 The meeting, which recorded its highest number of participants yet this year, was organized by the Society for the Advancement of Chicanos and Native Americans in Science (SACNAS). However, participants included not only Mexican-American or Native American youths and professionals. There were also students from Argentina and the Caribbean.

Members of SACNAS that have supported this goal from the beginning took advantage of the opportunity to tell their personal stories and talk about how events like these have an influence on career success: from connecting with each other and sharing concerns with students facing the same challenges, to learning where to get the resources to pursue university studies, the benefits are priceless for participants.

“The support and interaction were invaluable,” said Juan Meza, a doctor in mathematics who has been attending SACNAS since he was a student. “This has been a place where I could go when things got tough. It was almost like an extension of my family.”

Recently, Meza, who is the son of Mexican immigrants, was named one of the 100 most influential Hispanics in the country by Hispanic Business magazine.

Others, like the Native American Jani Ingram, a doctor in chemistry, did not attend these events because she did not know they existed. Now, as a professor, she encourages her students to participate and take advantage of the opportunities available to them as minority students.

“I did not know about the existence of SACNAS before I got my current position,” Ingram said. “I had no idea about the opportunities. It would have been great to bring my students to meet other students like them.”

Tina Garza, doctor in biology and native of El Paso, Texas, emphasized the importance of diversity in academic careers. “Diversity is important because it provides diversity to the way questions are asked, questions that specifically affect our own communities.”

That is precisely the goal of SACNAS and annual events like this. Through individualized counseling, specialized seminars, educational resources and scholarships, as well as workshops with science professionals, the organization hopes to increase the representation of participants in the field of science.

This formula has proven to be successful, satisfying an existing demand among minority students. After all, the event has grown from 400 participants at the beginning to more than 3,000 today.

In times when these communities lack representation, encouraging and guiding future Latino or Native American scientists is not only a duty, but a necessity.