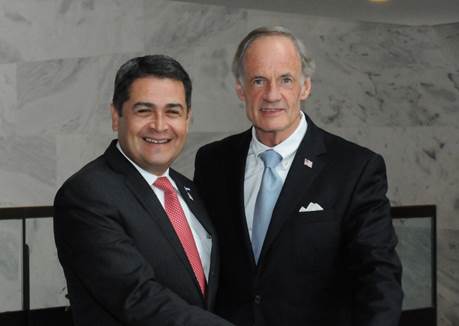 Today, U.S. Senator Tom Carper (D-Del.), top Democrat on the Senate Homeland Security and Governmental Affairs Committee, met with the President of Honduras, Juan Orlando Hernandez, in Senator Carper’s Washington, D.C. office to discuss ongoing efforts to improve security and economic opportunities in Honduras and decrease undocumented migration to the United States. In January, Senator Carper traveled to Guatemala and El Salvador where he met with the leaders of the Northern Triangle nations, including President Hernandez, President Jimmy Morales of Guatemala, and President Salvador Sanchez Ceren of El Salvador.

In December 2015, Senator Carper released the report, Stronger Neighbors – Stronger Borders: Addressing the Root Causes of the Migration Surge from Central America. The report found that the ongoing surge in migration from the Northern Triangle countries of Honduras, Guatemala and El Salvador reflects troubled conditions in those countries, including severe violence involving children.

The three nations have committed to an unprecedented regional plan – the Alliance for Prosperity – to try to improve conditions in the Northern Triangle. Congress has agreed to support their effort, and in December 2015, appropriated $750 million for Fiscal Year 2016 for coordinated initiatives to increase economic prosperity, rule of law and security. This investment underscores the U.S. commitment to helping these nations address the root causes  of poverty, violence, and hopelessness that drive so many people north — including unaccompanied children and mothers with young children.