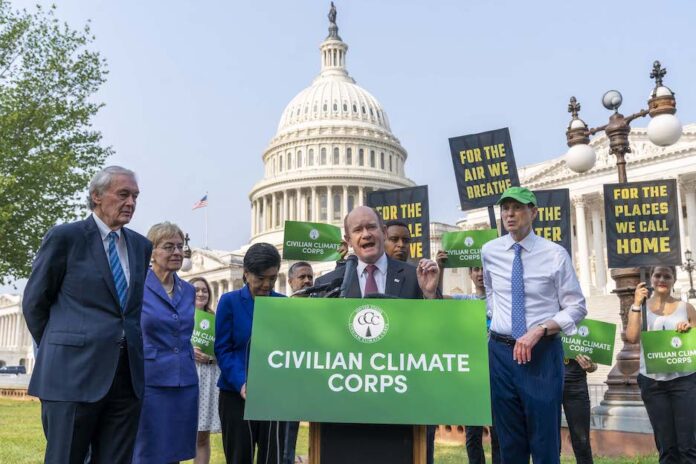 U.S. Senator Chris Coons (D-Del.), co-chair of the bipartisan Senate Climate Solutions Caucus, speaks at a press conference with bicameral leaders about the importance of including a CCC in the reconciliation package in Washington, D.C., July 20, 2021. (Photo courtesy of Senate Democratic Media Center/released). Download photos and video here.

Corps that puts people to work on the most important issues facing our nation today. AmeriCorps, which already has a robust existing network across the country and experience tackling the full range of climate challenges – from conservation and mitigation to disaster response, would play a central role in its implementation.

“This is a tried, true, and tested model that helped our country get out of the Great Depression married up with a program that has helped us over the last 25 years bring Americans together in service to our country,” Senator Coons said during his speech.

“When we harness that to the generational challenge of combating climate change,” he continued, “we can make a truly transformational difference for a generation of Americans, and for our country, and for our future. I am so excited to work with my colleagues on bringing this vision into reality.”

In a letter to House and Senate leadership, Senator Coons and his colleagues asked for several key components to be included in the Civilian Climate Corps (CCC), including its implementation through programs including AmeriCorps, which Senator Coons has long championed.