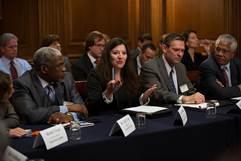 WASHINGTON – U.S. Senator Chris Coons (D-Del.), a member of the Judiciary Committee and an advocate on comprehensive immigration reform, participated in a roundtable discussion on Wednesday on ideas for overhauling our broken immigration system.

The meeting was hosted by the Senate Democratic Steering and Outreach Committee and featured 22 leaders who are involved with faith, agriculture, labor, and civil rights communities, including Ana Velasquez, the director of prevention and advocacy for the Latin American Community Center in Wilmington.

With the Senate working on a bipartisan solution that creates a potential path to citizenship for millions of undocumented immigrants while strengthening existing laws, today’s discussion was critical to the Senate’s efforts to hear insights from a broad array of experts and advocates.

“America is a country built by hard-working, upstanding immigrants who wanted nothing more than a shot at a better life for themselves and a better future for their families,” Senator Coons said. “There are currently a number of immigrants who came to America in order to contribute to our nation’s economy and security with hopes of some day becoming Americans.

It’s imperative that Congress has an open discussion on creating a pathway to citizenship for these hard-working immigrants. I thank Ana Velasquez for joining us at today’s meeting and sharing her views on the issues concerning Delaware’s immigrant community.”

The discussion comes on the heels of the introduction of the Border Security, Economic Opportunity, and Immigration Modernization Act of 2013 that reflects the bipartisan framework the Senate built on the following four principles: an earned path to citizenship, an effective employment verification system, the further strengthening of our borders, and fixing our immigration so it can propel our economy into the future. During the hour-long discussion, senators made clear their commitment to enacting legislation that supports these efforts, and helps fix our nation’s broken immigration system.

The Senate Democratic Steering and Outreach Committee is dedicated to fostering dialogue between Senate Democrats and community leaders from across the nation.

Each year, the Steering Committee hosts several meetings with advocates, policy experts, and elected officials to discuss key priorities and enlist their help in the development of the Democratic agenda in the Senate.