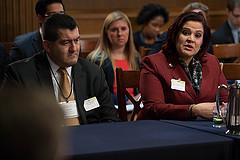 “Delaware is home to a rich community of Hispanic business owners and entrepreneurs that exemplify the American dream,” Senator Coons said. “Our economy depends on the jobs they create and the investments they make in our cities. As both a small business owner and a local representative, Councilwoman Cabrera understands the unique role government at all levels can play to support small businesses and create the conditions necessary for growth. I am grateful she could join us today to shed light on opportunities for Congress to better serve the Hispanic business community in Delaware and across the nation.”

During the meeting, Councilwoman Cabrera addressed a number of topics important to Hispanic business owners in Wilmington and nationally. She urged the senators to look for ways to establish mutually beneficial trade partnerships with Latin American countries and to make government contracts more accessible to small businesses. She also called for action to help unfreeze the credit pipeline and remove red tape for entrepreneurs seeking to start or expand their businesses.

Councilwoman Cabrera also urged senators not to abandon the fight for immigration reform and a higher minimum wage. “Our local and national economies have adjusted with minimal disruption each time we have raised the minimum wage,” Cabrera said. “[Raising the minimum wage will] help raise children and families out of poverty, reduce their dependence on federal assistance, and at the same time reduce government spending.”

Councilwoman Cabrera is a founding member of the Hispanic Business Association of Delaware and served as its first president. She has run her own marketing company and restaurant in Wilmington and has served as a Wilmington City Council Member At Large since November 2012.