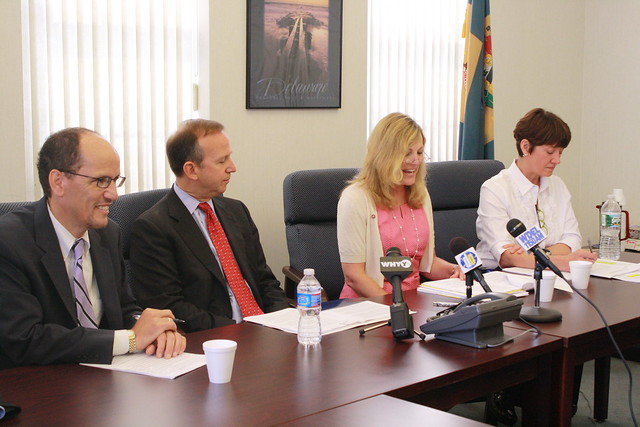 New Castle, DE – Secretary Rita Landgraf of the Department of Health and Social Services, announced on July 6th that the State has entered an agreement with the Civil Rights Division of the U.S. Department of Justice (“USDOJ”) that will promote the delivery of community-based care to Delawareans with severe and persistent mental illness.

The agreement resolves the USDOJ’s investigation of the services at the Delaware Psychiatric Center that began in 2007. Secretary Landgraf was joined at the announcement by Governor Jack Markell and Thomas E. Perez, Assistant Attorney General for Civil Rights.

“This agreement confirms our commitment to serving individuals with serious mental conditions in the most community-integrated setting possible,” said Secretary Landgraf. “In the last two years, in areas where we could make an immediate impact, I believe we have. For example, by bringing in Kevin Ann Huckshorn, a recognized national leader in mental health, we have been able to begin to change the culture and increase compliance with medical and psychiatric protocols at the Psychiatric Center. But there is a lot of work ahead of us, and we must continue to build a strong mental health support system in the community.”

“Secretary Landgraf and her team have been devoted to improving conditions at the Psychiatric Center from day one of this Administration,” said Governor Markell. “It has not been easy, but conditions at the Center have improved significantly. As this Agreement makes clear, the next step is addressing the historical overreliance on institutional care. The Secretary and her team have already begun laying the foundation to build a strong community-based mental health system in Delaware. The Agreement demonstrates the State’s commitment to ensuring that individuals with severe and persistent mental illness are treated with compassion in the most integrated setting appropriate to their needs.”

“Across the country we are enforcing the rights of people with disabilities, affirmed by the Supreme Court more than a decade ago, to live and receive services in their communities,” said Assistant Attorney General Thomas E. Perez. “The services that the state of Delaware has agreed to provide under this agreement will enable people with mental illnesses living in Delaware to reside successfully in their homes and communities, rather than entering costly segregated facilities. As states around the country work to breathe life into the rights established promised by the ADA and Olmstead, this agreement demonstrates Governor Markell and Attorney General Biden’s vision and leadership.”

The 32-page agreement between the State and the USDOJ is the result of a three year investigation conducted by the Civil Rights Division. That investigation began in November of 2007, and culminated in a November 2010 letter in which the USDOJ concluded that the State’s “current mental health system fails to provide services to individuals with mental illness in the most integrated setting appropriate to their needs,” as required by the Americans with Disabilities Act.

The agreement commits the State to improve the delivery of mental health services in the following four respects:

* The State will help ensure that persons treated in the Delaware Psychiatric Center and similar facilities have the ability to be placed in less-restrictive, medically appropriate settings by:
o conducting an assessment of individuals currently admitted to the Delaware Psychiatric Center or similar facilities, and creating specialized transition teams for evaluating whether those individuals can move to less-restrictive settings;
o ensuring that all persons institutionalized at the Delaware Psychiatric Center or a similar facility in the future have a discharge plan that will enable the person to return to the community when ready; and
o ensuring that persons who receive inpatient mental health services are seen promptly by medical professionals and that the number of state-funded patient days in inpatient settings is reduced by 50% by 2016.

* The State will help limit unnecessary institutionalization of persons with severe or persistent mental illness by developing a strong, state-wide mental health crisis system, including:
o timely and accessible support to persons with mental health needs through a 24-7 crisis hotline and mobile crisis teams;
o expanding the number of crisis apartments for persons experiencing a mental health crisis; and
o developing a new crisis walk-in center in Ellendale, Delaware, that will provide psychiatric and counseling services to persons experience crises in underserved areas in Kent and Sussex counties.

* The State will expand community-based mental health services so that persons can receive services in the community, including increasing the number of Assertive Community Treatment teams, Intensive Case Management teams, and case managers that can provide multi-disciplinary services to those with severe and persistent mental illness.