(DOVER, Del.) – An emergency suspension order for the medical license of Dr. Melvin L. Morse was signed today by Secretary of State Jeffrey W. Bullock and the President of the Board of Medical Licensure and Discipline (BMLD), Dr. Stephen G. Cooper. The action was taken based on the serious criminal charges pending against Dr. Morse, including repeated violent actions against his own child, repeated incidents of endangering his two minor daughters, and the fact that he is currently a practicing pediatrician. The formal complaint and motion to suspend Morse’s license on an emergency basis was submitted to the Secretary of State’s office yesterday and served to Morse.

“Our duty is to protect the public from potential harm, and we believe that the allegations against Dr. Morse are sufficient to immediately suspend his medical license,” said Secretary Bullock. “A pediatrician who is alleged to have committed crimes against children, whether the victims are patients or not, should not have contact with patients until there is a full evaluation of his case.”

In ordering the emergency suspension, Secretary Bullock and Dr. Cooper assert that Morse presents a clear and immediate danger to the public health if permitted to continue to practice medicine.

“This emergency suspension will remain in effect pending a hearing by the Board,” said Dr. Cooper. “As physicians, we are entrusted with the care of our patients, and it is the Board’s job and my responsibility as its president to ensure that we do what is necessary to protect the public from possible harm by a physician who has been accused of serious crimes such as these.”

Among the criminal charges against Morse are reckless endangering, endangering the welfare of a child, and felony conspiracy which are crimes substantially related to the practice of medicine pursuant to Board Regulation. The Division of Professional Regulation’s investigators have been working with law enforcement and the Division of Family Services regarding the allegations against Morse.

Di “no” a la flacidez muscular 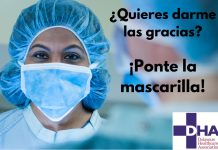