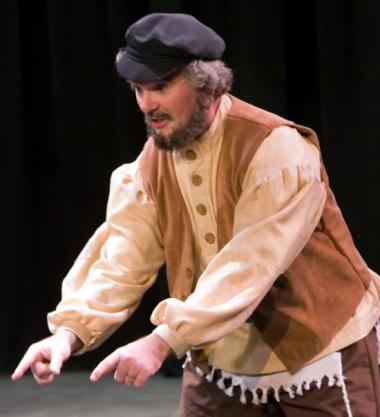 Ken Skrzesz wears many hats, to say the least, in this production of FIDDLER ON THE ROOF. “And that’s a good thing!” commented Company Manager, David Button (who also portrays the Russian character, Sasha, in FIDDLER). “Working with Ken in any capacity – creatively, professionally, or onstage – comes with a high energy and a clear expectation to raise the bar of artistic quality.

FIDDLER is no exception, as Ken is at his best.” Ken is Executive Director for Clear Space Productions, a non-profit performing arts and cultural organization based in coastal Sussex county. Ken’s extensive theatre background includes professional theatre performances in over 20 roles and the direction and/or choreography for more than 50 plays, musicals, and operas.

Because of his extensive background in Eastern European folk dance, is not only the perfect Choreographer for this production, he also stars as Tevye the Dairyman.

Ken spoke about his character, “Tevye is often played by an older actor in a more ‘over the top’ style. My truth for this character is that he has been married 25 years (which makes me the right age) and is centered in a place of love and generosity toward his faith, his family and his community.

He is a real man, facing real issues in real time. It only makes sense to me that realism should permeate my acting choices.”

Ken feels that this type of production is what Clear Space does best. He said, “Clear Space was founded on the idea that we can create excellent theatre with well-trained local talent.

This is different than ‘importing’ talent to confirm quality.

The multi-generational cast of FIDDLER ON THE ROOF allows students to work side-by-side with professional adult actors.

The adults expand their own experiences by encouraging the students to step beyond their own limitations. It is the best possible environment for creative and collaborative work.” Several of the students interact directly with Ken onstage and are overwhelmed by this opportunity.

Ashley O’Donnell, who portrays Hodel, Tevye’s daughter, said, “Ken brings such a phenomenal energy to the rehearsal process. It pushes me to new levels and makes me want to work so much harder.

Connecting with him onstage is just amazing.” Ken has also found that working onstage with his students is an unforgettable experience. He commented, “Every good teacher knows that students do not learn by being told information.

They learn by observing modeled behavior. When I walk into rehearsal I have to give what I expect to receive from the young actors on the stage. We have to match each others’ energy on stage and there is nothing more inspiring than that.”

Ken, along with the rest of the cast and Creative Team is glad to be sharing this experience with such a phenomenal show such as FIDDLER ON THE ROOF.

Ken commented, “Ultimately FIDDLER is about the natural maturation of a family. Their circumstance, being Russian Jews at the turn of the last century, makes the problems of their family more dramatic than most.

But every father and mother watches their children make choices, move away, and become adults while dealing with their own lives and the needs of their community.

The themes are universal and timeless.” Student Katharine Ariyan, who portrays Tevye’s eldest daughter, Tzeitel, added, “Within FIDDLER, families have such a strong hold in their faith and their traditions – it’s so different than the way we are today. It really gives you a new perspective on what is important in life.”

FIDDLER ON THE ROOF will be performed at the New Cape Henlopen Theatre/Cape Henlopen High School on Kings Highway in Lewes running March 18-20 at 7 p.m. with 3 p.m. Sunday matinee on March 21. The new theatre has assigned seating, so early reservations are encouraged.

Tickets are $25 General Admission, $20 Seniors, $15 Students, and $5 Children 12 and under. Tickets can be reserved online at www.ClearSpaceProductions.org or by calling the Clear Space Box Office at 302.644.3810.

Additional performances will be held at the Schwartz Center for the Arts in Dover on Friday, March 26, and Saturday, March 27, at 7:00 p.m.

For pricing and ticket information to the Schwartz Center only, please call 302.678.5152.

Ken concluded, “FIDDLER communicates themes that resonate with everyone. Faith, family, tolerance, change – all things we grapple with everyday of our lives.

Good theatre allows us to see ourselves in what is being presented and causes us to reflect upon our own choices.” And this show takes you on an amazing journey!