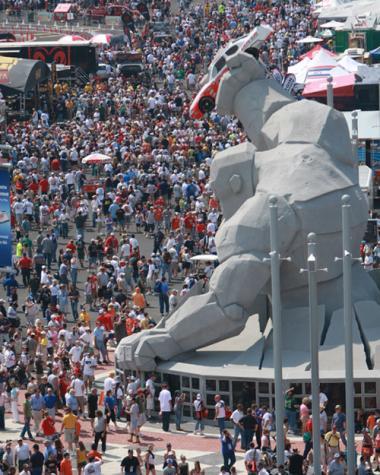 NASCAR returns to the Monster Mile May 14-16, 2010 for a NASCAR tripleheader weekend! Fans in Dover know that race weekend is more than just a race – it’s great food, fun entertainment and an awesome opportunity to bond with the most passionate race fans on the circuit! Below is a list of activities that fans coming to the track on race weekend will want to be sure to check out.

Check back often as this page will be updated as events and activities are announced leading up to race week in Dover.

– Free interactive displays in the FanZone

Live performance by Recycled Percussion on the Victory Plaza stage

Several popular drivers from the NASCAR Camping World Truck Series will sign autographs for race fans on Friday, May 14 from 1 to 2 p.m. The free autograph session will be held in the FanZone near the Camping World display. Fans are encouraged to arrive early as the free autograph session is on a first-come, first-served basis. Participating drivers include Todd Bodine, Jennifer Jo Cobb, Donny Lia, Tayler Malsam and Jason White, among others.

Kurt Busch, driver of the No. 2 Miller Lite Dodge, will sign autographs at Doc Magrogans Oyster House located inside of the Dover Downs Hotel & Casino adjacent to the Speedway. Autograph session is on a first-come, first-served basis.

Monte Dutton, veteran NASCAR writer for the Gaston Gazette in Gastonia, N.C., and weekly trade paper FasTrack, will perform with his guitar in the Terrace Lounge (near Gate 11) at Dover Downs Hotel & Casino on Friday and Saturday night. The self-taught guitarist is well known around the NASCAR circuit for his in-depth racing columns, but only one of his country tunes is about the sport.

“Trackside Live!” on the SPEED stage

Be there for the craziest party in NASCAR in front of the loudest fans. Legendary guests from the world of NASCAR drop in LIVE to look ahead at the big race. Join Steve Byrnes, Larry McReynolds, Jeff Hammond, Darrell Waltrip and guests as they work hard and play hard to bring a fun and insightful show LIVE from the track.

Click here to purchase tickets for the Heluva Good! 200.

Visit the “Official NASCAR Trackside Merchandise” trailer in the FanZone for an autograph session with several drivers from the NASCAR Nationwide Series. Participating drivers include Trevor Bayne, Colin Braun, Brian Scott and Michael McDowell, among others. Fans must first stop by location and receive free autograph session ticket.

“The King” Richard Petty, owner of Richard Petty Motorsports and a seven-time Dover winner, and AJ Allmendinger, driver of the No. 43 Best Buy Ford, will be guests during a free fan Q&A session at the Victory Plaza stage adjacent to the Monster Monument on Saturday morning. The Q&A session is free for all fans!

“NASCAR Smarts” on the SPEED stage

Test your NASCAR knowledge! John Roberts hosts a NASCAR trivia contest between Kyle Petty, Rutledge Wood and select fans during a live taping of “NASCAR Smarts” on the SPEED stage.

Click here to register online for The NASCAR Foundation Track Walk at Dover.

The cost to register online is $ 30. Registration will also be available at the track on race weekend. Fans can visit The NASCAR Foundation hauler in the FanZone display area outside of Turn 4 on Friday, May 14 from 9 a.m. to 5 p.m. or Saturday, May 15 from 8 a.m. to 5 p.m. The cost to register at the track is $ 35. Children 14 and under may walk for free with a registered adult. All participants, including online registrants, must stop by the registration booth on race weekend to sign waivers.

“Fast Track to Fame” on the SPEED stage

Singers, dancers, comedians and a whole lot more perform in front of three judges, including Riki Rachtman, a former rock star and host of radio’s NASCAR 24/7, Hollywood talent manager Kathy L. Carter, and a guest judge culled from NASCAR’s many personalities. The show will be hosted by Michael Waltrip and FOX/FSN on-air personality Charissa Thompson.

Grammy-nominated country music artist Joe Nichols will sing the national anthem prior to the start of the NASCAR Sprint Cup Series race on Sunday, May 16. Nichols’ hit song “Gimmie That Girl” currently sits at No. 1 on the Billboard country music chart.

The singer of country hits “Tequila Makes Her Clothes Fall Off,” “The Impossible” and “Brokenheartsville,” will also perform a live concert on the Victory Plaza stage outside of Turn 4 at the track beginning at 9 a.m. on Sunday morning. The concert is free for all fans!

Jeff Gordon, Dale Earnhardt Jr., Denny Hamlin, and “The King” Richard Petty will be special guests during an exclusive, hosted question-and-answer session in the Monster Mile Club, an all-inclusive pre-race hospitality option now on sale. A ticket to the Monster Mile Club includes a trackside tour on the frontstretch of the track as teams prepare for the Sunday race, live entertainment, an unlimited food buffet with beverages, a special Dover souvenir gift, a souvenir program, interactive games and much more.

LIVE, loud and never dull! The always-entertaining crew from “NASCAR RaceDay” gets you ready for the main event every weekend. Get up-to-the-minute analysis, driver interviews, race-day predictions and much more. John Roberts, Kyle Petty and Kenny Wallace are joined by Hermie Sadler and Wendy Venturini for fast paced coverage that will keep you in the driver’s seat. NASCAR on SPEED – Be there!

Schedule and events are subject to change.