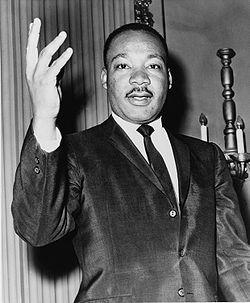 Martin Luther King Jr. Day is a United States holiday marking the birthdate of Rev. Dr. Martin Luther King, Jr., observed on the third Monday of January each year, around the time of King’s birthday, January 15.

King was the chief spokesman for nonviolent activism in the civil rights movement, which successfully protested racial discrimination in federal and state law. He was assassinated in 1968.

The federal holiday in King’s honor was officially observed in all 50 states for the first time in 2000.

The bill established the Martin Luther King, Jr. Federal Holiday Commission to oversee observance of the holiday, and Coretta Scott King was made a member of this commission for life by United States President George H. W. Bush in May, 1989.

On May 2, 2000, South Carolina governor Jim Hodges signed a bill to make Martin Luther King, Jr.’s birthday an official state holiday. South Carolina was the last state to recognize the day as a paid holiday for all state employees. Prior to this, employees could choose between celebrating Martin Luther King Day or one of three Confederate holidays.

In Virginia, it was known as Lee-Jackson-King Day.[19][21] The incongruous nature of the holiday, which simultaneously celebrated the lives of Confederate Army generals and a civil rights icon, did not escape the notice of Virginia lawmakers. In 2000, a Martin Luther King Day was established in Virginia.[22]

Outside the US one place where this day is observed as important is in the Japanese city of Hiroshima under mayor Tadatoshi Akiba, who holds a special banquet at the mayor’s office as an act of unifying his city’s call for peace with King’s message of human rights.