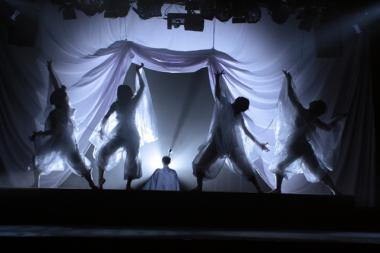 As the first half of an Arts Exchange program in their new season, Clear Space Productions is hosting The Chojinyobiko Theater Group of Osaka, Japan as they perform their original bilingual musical, SHOGUN TSUNAYOSHI (Dog’s Best Friend) on Saturday, October 10, at 7:00 p.m. and Sunday, October 11, at 3:00 p.m.

These performances will debut in America at the brand-new Cape Henlopen Theatre on Kings Highway in Lewes. To complete the Arts Exchange, the Clear Space Theatre Company along with students from the Theatre Arts Academy and Broadway Bound programs will travel to Osaka in April 2011 to perform a traditional American Musical and share American performing arts and culture with Japanese students and audiences. SHOGUN TSUNAYOSHI follows the life of Tsunayoshi, the 5th Shogun of 17th century Japan, as magical characters struggle to create a society ruled by compassion and love.

Although the performance is bilingual, subtitles will be used to translate the Japanese language. In addition, two American actors (Clear Space Company Manager, David Button, and Cape Theatre Arts Academy Student, Ryder Willis) will participate in the production as well as five students from the Broadway Bound program. These students acting among Japanese actors include Gabrielle Pardocchi, Abigail Pardocchi, Joshua Hoffpauir, Mary Grace Cannon, and Dallas DiGuglielmo. Michael Steuber, Broadway veteran and choreographer of the production commented, “The show is mostly geared towards children.

Even so, it is sure to be an event for audiences of all ages.” Michael has worked with the Chojinyobiko Theater Group while living as a full-time resident in Osaka for the past ten years. Ken Skrzesz, Executive Director of Clear Space, is really looking forward to the exchange. He commented, “It is such a fantastic opportunity for the students to learn about a new culture through this exchange and be able to interact with them in a performing arts setting.”

Michael Steuber and Majinhunta Mitsurugi, Directors of the Chojinyobiko Theater Group, are thrilled that their students will have a chance to interact with the students of Clear Space and even perform with them. Last fall, when the Arts Exchange program was finalized, Steuber travelled to Lewes to observe Clear Space’s Broadway Bound program. He was so thrilled with the challenging and professional level of Clear Space’s Broadway Bound Program that he created classes based on the Clear Space model for the Chojinyobiko Theater Group.

This performance of SHOGUN TSUNAYOSHI will mark the debut performance in the brand-new Cape Henolopen Theatre. With reserved and comfortable seating, the new theatre also offers professional lighting and sound instruments as well as an 800-seat house. There is ample parking from both the Kings Highway and Savannah Road entrances.

While in Lewes, the Chojinyobiko Theater Group will also offer workshops free to the public in Japanese traditions including calligraphy, kimono customs, and tea ceremonies on Saturday, October 10, from 10 a.m. – noon at the Cape Henlopen Theatre.

SHOGUN TSUNAYOSHI (Dog’s Best Friend) will be performed on Friday, October 10 at 7:00 p.m. and Saturday, October 11, at 3:00 p.m. at the Cape Henlopen Theatre. Tickets are $25 general admission, $20 for seniors, $15 for students/military, and $5 for children 12 and under. To reserve tickets or find out more information about the Arts Exchange and other upcoming events (including 100 Years of Broadway II), please visit www.ClearSpaceProductions.org or call the Clear Space Box Office at 302.644.3810.